August 2, 2011. Florence Italy. We boarded the "Frecciarossa" -- the 175 mph high-speed train from Bologna to Florence at 9:30 a.m. Our train was actually at 10:30, but a train came into the station and it was headed for Rome, so we boarded. Interestingly, no one asked us for our tickets or any other identification. These are wonderful trains. Comfortable, air conditioned, VERY fast and has internet on-board!  It only took us 35 minutes to get our destination. 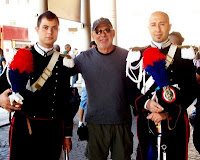 One interesting event occurred when we were making our way to the train station in Bologna. We noticed much of the station blocked off and radio and TV crews setting up their equipment. Additionally, there were a fair number of Carabinieri" (police) at and around the station. Once we neared the front door of the station, I asked what was going on and was told that it was the anniversary of the 1980 bombing of the station which killed 85 people and wounded 200 others. The policeman told me it was the worst tragedy of its kind since the end of WWII. It seems there would be a commemoration later in the day. The picture at the right is of me and the policemen who said they were in their "dress uniforms". Very impressive, wouldn't you say???

Once in Florence, it was easy to find our hostel since we had stayed there before. I made a reservation for 2 full days at the Alex House on "Borgo de Grechi.  We were surprised to find, this visit, that our accommodations is an "apartment", with a living-room, dining-room, kitchen, private-bath and bedroom -- and, of course, the balcony overlooking the city! Really neat. The Alex House is centrally located and very near most of the interesting spots in Florence. Not far away is the Ponte Vecchio and Galileo Museum. Florence is still full of life, with tourists everywhere. There are large numbers of groups walking throughout the city with tour-guides speaking all sorts of languages. We were also told that August is the month that most Europeans take their vacation, so people from all around the continent are coming here for their holiday.

In the early afternoon, we found the Jewish Museum and Synagogue not too far from the hostel. We enjoyed an hour going through the museum and spoke with one of the docents. Her comments were interesting, noting that Italian Jews don't use the word "Jew" or "Jewish" to describe themselves. Rather they use "ebraica" (and variations of the word) to describe their community. She said it was their way of putting a distance between the connotation of "Jew" (Juden in German) and all that it implies about their experience in Italy. Down the street from the museum is  "Ruth's Kosher Vegetarian Restaurant", and we made reservations for tomorrow evening at 7:30 p.m. That should prove to be interesting, I think.

We finished the evening by dropping by the "Odeon" to see if any English language films were on the play-bill.  We saw Roberto Benigni's It's a Beautiful Life. It seemed to punctuate our earlier visit to the Jewish Museum. Just outside the theater, the Cafe Odeon was offering its Happy Hour and for the price of a beer, we were able to enjoy a nice dinner in their outside seating.

We have two more days in Florence to go. So far, we haven't decided what to do as yet. Maybe a day trip or some other interesting activity. We'll know more in the morning after asking some questions and doing some research.

Ciao for now.
Posted by Dennis Steele at 1:03 PM