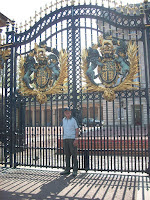 I was out at 10 a.m. this morning. After scouting around on the tour bus yesterday, I figured out a good plan -- off to the British Museum, th 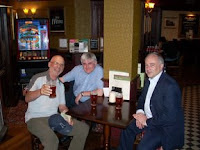 en to the Imperial War Museum and then t Buckingham Palace. I thought maybe the queen would want to talk to me about the problems of the day. As it turns out, she didn't. Go figure!! I did meet a nice "Bobby" at the gate to the palace and we did see Princess Anne leave in a car.

The British Museum is a huge place, covering most, if not all, aspects of human civilization. I took my time to see the exhibits on Europe and a bit of Egypt. They have extensive collections from just about every part of the world. I figured out the London Underground and took the subway everywhere today. I bought a 2-day pass and found it to be easy to navigate, cost-effective and safe. 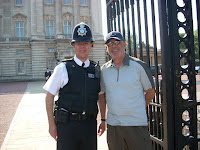 op was the Imperial War Museum. It was in a poorer part of town, but still safe and clean. The weather was absolutely perfect today, as it was yesterday as well. The highlight, in my opinion, was the Holocaust exhibit on the 3rd floor. It was very powerful and touching. Very complete. There was also an exhibit on the 4th floor with a "Inhumanity to man" theme, and touched on dictators and despots throughout history. A teacher and his class were there watching the video, and I enjoyed the teachers commentary. It was gratifying seeing young people study such an important subject.

But the highlight of the day was meeting a couple of wonder people in a "pub" called The Kings Head located a couple of blocks away Buckingham Palace. As one of the guys was 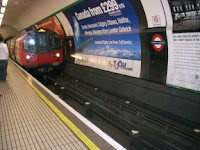 buying a beer, I commented that, since they were locals, I'd buy the same beer as them. Colin Snook (he is sitting to my immediate left in the picture)suggested to his friend Martin Thirsk buy me a beer. From that point on, we enjoyed an hour or more talking, having a good laugh about this and that, talked a bit about travel and politics (I've found the Britishers enjoy talking about politics). Neither Colin nor Martin would allow me buy a round of drinks. A great a wonderful couple of guys enjoying one of the many pubs at the end of a workday. It was lucky to run into them.

Tomorrow I'll be going back to Roger and Helen's on the 5:30 p.m. train from Paddington Station. I plan to take in the Tate Museum in the morning. After talking with Jennifer today, I was planning to go to Speakers Corner on Hyde Park. Speakers Corner is a bastion of "free speech", and people will stand on boxes or stools and talk about everything under the sun -- including, and most often, British politics and how good or not-so-good the Prime Minister and his/her government is doing. But, unfortunately, they only do this on Sundays. It'll be a good adventure for another trip to London.

Posted by Dennis Steele at 12:46 PM No comments: