ay yesterday, Jennifer and I got a late state this morning and left the hotel at 10:30 a.m. I needed to buy a sweatshirt, so went went to the outdoor market not far from the hotel. The market is called the Albert Cuypmarkt and is the best known and busiest in Amsterdam. It's around 4 or 5 blocks long along a nice section of town. After an hour or so, I was the owner of a new sweat-shirt with a hood. Perfect for the cool evenings in the city. 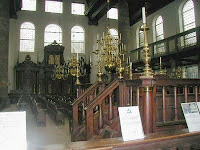 d we'd see the Old Portuguese Synagogue, or "Esnoga", near the center of the city and took the tram in that direction. This is a truly old building dating back to its construction in 1671. The Synagogue is named for the fact that the Jewish community was expelled from Spain. They went to Portugual and finally Amsterdam in the early 17th century. As Spain and Holland were friendly countries, the Jews called themselves "the Portuguese Jews" to eliminate their immigration problems. Before 1940 there were approximitly 200,000 Jews living in Holland. Now there are around 20-25,000 Jews still in the country.
Jennifer and I went across the street to the Jewish Museum, but sin 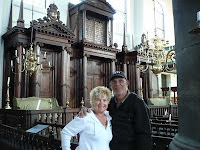 ce it was going to close in 1 hour, we decided to see it on Sunday. We're also planning to rent bicycles from the hotel on Sunday as well, so that should be lots of fun. Amsterdam is a big city, geographically, but all of the sights are in a relatively small area, so bicycles will be a great mode of transportation for the day.
We headed back to our "favorate" tapas restaurant for a touch of dinner at around 6 p.m. and thought we'd see if there was a cinema we could see. A short tram ride back into the city center and we were at the Pathe Cinema looking for a film. We decided to see It Happened in Las Vegas with Ashton Kushner and Cameran Diaz. It was a thoughly delightful romantic comedy and we had a great time.
So, as reported, tomorrow we're on to Brussells.
Ciao...
Posted by Dennis Steele at 12:32 PM No comments: