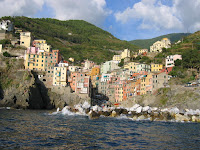 August 3, 2011 -- Florence, Italy. This morning we went over to the train station to get our reservations for Rome on Thursday. We've gotten a 11:15 reservation one of the fast-trains, so it'll be a comfortable ride on the last leg of our journey. While we were there we decided to follow through on some research we did last night and take a day trip to Cinque Terre (pronounced: chink-wa terry). We boarded the train for Cinque Terre at 9:30 a.m. and arrived around noon.

Cinque Terre is on the coast of the "Italian Riviera". The closest city, and the city we changed trains in is about 10 minutes away by train but through a long LONG tunnel through the mountains.. The literature about the area says that "over the centuries, people have built terraces on the rugged, steep landscape right up to the cliffs that overlook the sea. Part of its charm are the small family owned businesses. Paths, trains and boats connect the villages, but cars cannot reach the villages from the outside".

The first train stop is the village of Riomaggiore. This is an amazingly beautiful village dating from the 13th Century. It is known for its unusual character and wine. We didn't see the vineyards but they are, we were told, extensive in the hills nearby. It seemed to me  the major industry was tourism. There were hundreds of people walking the narrow streets, looking in the shops and at the marina. I noticed, for example, a group of about 10 folks dressed in Scuba gear getting into a boat for a trip out into the harbor. There was a dive shop nearby. 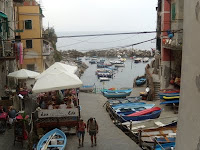 While there are a total of 5 villages all connected, we decided that one was enough. By the time we walked up and down the hills, and climbed the hundreds of steps from the top of some of the streets to the bottom where the marina was located, we were "done"!  We made our way back to the train station and caught a 4:30 p.m. back to Florence thru La Spezia and Pisa. We finished up the evening having a delightful "kosher vegetarian" meal at Ruth's Restaurant in the Jewish section of town.

Ciao for now
Posted by Dennis Steele at 12:26 PM No comments: