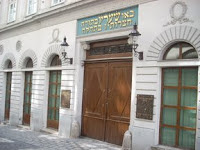 1) the Jewish Section in Vienna, and 2) the Vienna Planetarium. I went to the local train station, Westbahnhof, near the hostel and looked around for the Tourist Information office. I found out that it was located downtown in an area called Karlsplatz. It is near the opera house and the area was quite a bit different from yesterday. It was far more cosmopolitan, busier and clearly a higher-end part of town. I've discovered that, when one is looking for a particular venue like the Tourist Information Office, it's a good idea to ask directions, go a little bit and ask again!

After a bit, I walked into t 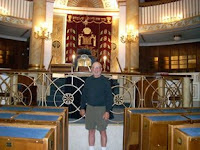 he Tourist Information Office and found that I was within a few blocks of the Jewish Museum, a Holocaust Memorial and the largest and oldest synagogue in the Vienna. I went to the museum first and asked about tours. I was told that the synagogue had an English language tour. So, the good news is that the tour was going to proceed at 2 p.m. (it was noon), the bad news is that they required a picture I.D., so I had to go back to the hostel to get my passport. It only took me about 15 or 20 minutes tol get back there and I had a side benefit of learning the subway system REALLY well!!
I returned to the synagogue at 2 p.m. and there were around 8 or us, inclu 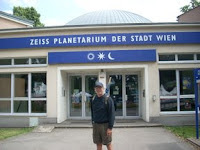 ding an Israeli couple. The tour was of the Vienna Synagogue itself, not the neighborhood, but I was glad that I was able to find a tour at all. During the discussion, the tour guide talked about the plight of the Viennese Jews over the centuries. It's interesting that the Israeli couple couldn't understand why that "just didn't fight back, insist on their rights or leave"!! We talked about about the alternatives the Jews had at the time, and I thought it was wonderful that the Israeli mentality was to "fight" in some way or another. There are currently 7,000 Jews living in Vienna whereas there were more than 150,000 before the war. The tour lasted about an hour and we left, each of us going in different directions. 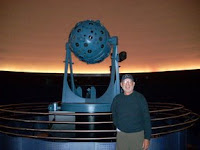 On the way back to Westbahnhof, I spotted this cool little internet cafe, paid my 2.5 Euros and "you know the rest". I've enjoyed my stay Vienna very much. It is a beautiful and friendly city. There are cute shops, cafe's and bistros everywhere. I look forward to returning here someday. There is so much more to see. Well, I've given myself a good excuse to take another trip to Europe next summer!!

Tomorrow I'm off to Krakow and Auschwitz. The adventure continues.......

Posted by Dennis Steele at 6:21 AM No comments: