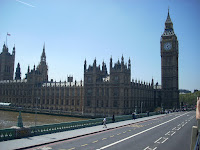 Hello from London!!! Well, today Roger Sims took me to the Stroud train station at 7:45 or so. I boarded an 8 o:clock train for London. I was able to confirm yesterday that my Eurail pass works for the train, so that was great. It had been prepaid. I saw there was first-class and second-class seating. I chose to go into first-class and waited for the conducter to kick me out of there. But, nope, I was ignored -- and as a matter of fact, I didn't see the conductor at for the entire one and one-half hour journe 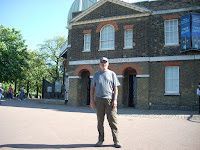 Helen Sims had printed me a map showing the route between the Paddington (London) train station and the youth hostel. So, upon arriving in London I set about walking the mile or so there. It was easy to find and it turns out t 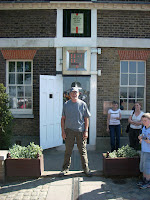 he youth hostel is quite nice -- there is a shower and w.c. (yep, that my new term for the you-know-what). There are two bunk-beds there and I noticed another person had been there before me. I haven't had a chance to meet him yet. That'll come later, I'm sure.

After checking my bags at the hostel, I made my way to the Baker Street undersground station and found a tour-bus. I bought a ticket and started a 2-hour journey 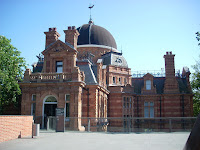 around much of London. I spotted a number of sites I want to see tomorrow and Thursday, including the London and Tate Museums. Upon arriving at the Tower of London (it's a prison as you know), I changed from the bus to a boat and went down the Thames River to the Royal Greenwich Observatory. Great fun. I stood on the Zero Meridian, with one foot in the Eastern Hemisphere and one foot in the Western Hemisphere. I met the planetarium lecturer and took some nice photos of the 28" refracting telescope and the Transit Telescope at the Zero Meridian.

I went to see Iron Man tonight. Grrrreat movie. It is tongue-in-cheek and Robert Downey is very good. So, for those of you who like that kind of thing, I recommend it highly.. 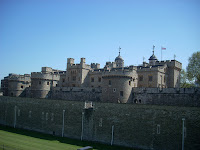 The photos I've uploaded include one of me on the zero meridian. There's a picture of Big Ben and Parliament as well as the Tower of London. Lots of folks "lost there heads there!!"