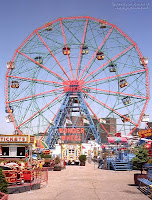 Today was a pretty simple day. We started out visiting the street fair along Lexington Avenue near Grand Central. There are several blocks of vendors and eateries all looking to sell you their goods. The street was packed with visitors and residents from all over the City. Lots of fun.

We then made our way to 49th Street and Sixth Avenue and took the train back to Coney Island. Along the way, we stopped at Sheepshead Bay. This is the neighborhood I lived in during most of 1964. I didn't find the exact apartment, but I did remember the street and the fact there was a school adjacent to the house (I lived in a "walk down" underneath a residence).  I didn't recall anything about the neighborhood or the shopping. Obviously it has been a long time since I was there and things change. But the street itself was the same.

We then boarded a bus and continued our way to Coney Island. We decided to revisit our  pleasant day there. It was delightful. We made a stop at Nathans Famous (hotdogs) and danced on the boardwalk to a rock D.J. The crowd was  having a great time -- clapping their hands, dancing in place and rockin' to the music.

This evening we had dinner at a new eatery round the corner. It just opened and is a buffet. We saw it yesterday, and the food looked great.  It turns out that, across the street from the restaurant, is the Hofbrau House (Munich) -- a New York City "branch". We climbed the stairs to the floor above the street and enjoyed 1/2 liter of German Ale -- Hofbrau style. Linda and I had been the Hofbrau in Munich July 2011, so it was fun to relive that experience New York style.

We discovered there is a film theater at the Lincoln Center showing independent films, so we set out around 8:30 p.m. to find our way there. We took a cab to make it easy.  Once there, we found that a free concert was being presented in the court yard of the Center. It was fabulous music performed by one of the premier orchestras in the world. We enjoyed ourselves as we listened and watched the many attendees.