July 25, 2011. Innsbruck Austria -- We spent the day wandering around Innsbruc 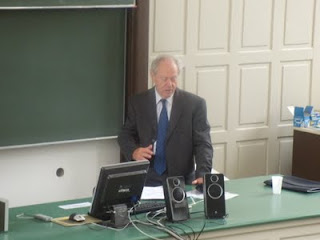 k so as to get a real feel for the city. Unlike the weekend, today is Monday and the city is bustling with activity. The stores, cafe's and offices are open and the familiar sounds of city traffic is everywhere. Innsbruck is the capital city of the "federal state of Tyrol" and has a population of about 120,000 people. There is an additional 30,000 students who study as one of the various campuses at the University of Innsbruck.
As mentioned in yesterday's post, we've been invited to the University of Innsbruck to a discussion and lecture on Human Rights at the university's law school. The speaker was Dr. Andras Sajo (http://web.ceu.hu/legal/sajo.htm) a justice on the European Court of Human Rights. Dr. Sajo conducted a lively discussion on the subject of "liberty and equality", and started with philosophical beginnings of the subject during the early Greek and then Roman periods. He brought the discussion forwa 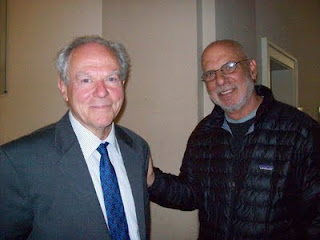 rd to the 18th Century and the French and American Revolutions. After a robust question and answer period, the afternoon was completed with a reception in his honor. There were a variety of refreshments -- including BEER!!! How European??

Later in the afternoon, around 5 p.m, we decided to take a "bus tour". It isn't the double-decker bus we've seen in most cities, but Innsbruck has city buses for touring. Innsbruck is a magnificent city with lush greens, clean streets and beautiful buildings. At one point we went to a high-point overlooking the city. The view was breath-taking -- too bad we didn't have a chance to take any photos.

We sat in front so we could take some photos. It happens that the driver, Harry, likes to practice his English, so he gave us a running commentary about the sights of the city. This was in addition to the commentary we were hearing through the earphon 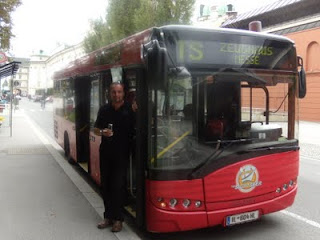 es. A most enjoyable hour and a half of sightseeing.

We finished our day by going to an English language theater nearby. We saw the film The Good Heart with Paul Dano and Brian Cox. It seemed that the majority of the theater goers were Austrian, so I'm not sure they were there for the English language or the subtitles in German!! Regardless, it's a great film and one you may wish to watch on DVD.