May 24, Rome. Today I got up a little early to make it to the Sistene Chapel before the crowds. I took the bus into Ottaviano and had a quick "cafe Americano" before heading over to the Vatican. I was on my way by 8:30 or so. Well, "what to my surprise", but that the line for the Vatican Museum and Sistine Chapel was about 2 miles long. I think I was number 1000 in line! After about 5 minutes I was number 1000 of 2000. The line grew in length quickly, bu 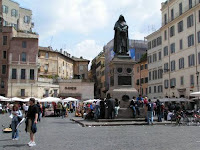 It took around 30 or 40 minutes to gain entrance t 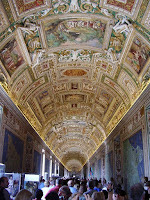 o the museum. I paid my 14 Euro fee and was on my way to see the collection and the Michelangelo. You must know, the museum is HUGE. There are artifacts everywhere. It tuns out that the museum was founded by Pope Julius II during his reign from 1503 to 1513. It is an amazing collection of tapistries, paintings, statuary -- everything imaginable. There were so many things to see, and my eye was caught by an interesting orrery in one of the gallerys. An orrery is a mechanical "model" rep resenting the motions of the planets (the picture is an example is isn't the one in the Vatican).
Most impressive, of course, is the Sistene Chapel with its Michelangelo ceiling. I was very surprised to see that the Creation of Adam is a relatively small fresco in the middle of many small scenes making up an enormous ceiling. Regardless of size, it is breathtaking and cannot be adequately described. One must simply see it and take it in. After around 3 hours, or so, I found my way to the exit.

I decided to go to the large market at a square called Campo d'Fiori. The market consists of vendors selling all things to eat. It occupies the center of the fairly large square with a fountain in the middle. Cute restaurants ring the outer perimeter. I decided to walk from the Vatican Museum to the market, a distance of about 2 miles or so. It took me over the "Fiume Tevere" and through much of the old city. I walked along a long windy and narrow street called Via Giula, and just before reaching the market I made a very lucky find. 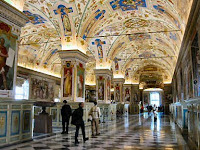 A small, almost hidden eatery was on the right side of the street. I stopped for a snack, and was pleasantly surprised on two counts: 1) that the food was absolutely wonderful, including a falafel wrap I took along with me, and 2) unlike the many restorantes and eateries around the "tourist" part of town, this one was very INEXPENSIVE!! Given that everything in Rome seems to cost 10 Euros, I was happy to pay the price for such a great experience and food.

The market was very busy, people everywhere. I was taken by the contrast of so much food, so many people with money to buy the food or eat in the restaurants and a number of homeless and beggars asking for help. I was especially bothered by an old woman sitting on the ground near the fountain. She was bent over, appeared to be very old and her appearance would be too disturbing to recount. She was dressed very warmly, yet the sun was out and it was a warm day. While yours truly and a few others put a couple of Euros in her collection plate, most people ignored her. It reminded me of the tremendous dichotomy that can exist in a city that gave rise to Western Civilization. I wanted to know more about her but, frankly, I was afraid to ask. Unfortunately, this is a scene one can see in any country of the world -- including the U.S.
So, today is Saturday and I have one more day in Rome before going on to Florence. I think I'll sleep late, do a laundry and nurse the blister I seem have one on my right foot!! Still, I've gotten some interesting impressions of the city. They go something like this:

Well, there thousands of other things I could list, but you get the idea. As always, more to follow....

Posted by Dennis Steele at 4:31 AM No comments: