August 7, 2011 -- Rome Italy. It's hard to believe that our trip is coming to an end. We'll be catching an Alitalia flight at 10 a.m. tomorrow morning. This has been quite the experience, and we've enjoyed every minute of it.

We did have a plan for today and set off around 10 a.m. to get a couple of things done. After an initial check-in at one of the local Internet Points, we found that it isn't possible to check-in on-line for our flight. I can only think it's because of the emmigration requirements. So, we'll get to the airport a bit earlier than planned to take care of checking in and getting to the gate on time.. 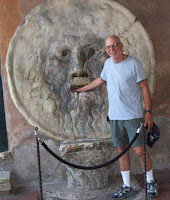 One of the tourist attractions we wanted to see is the "Bocca della Verita", in English it's translated as "Mouth of Truth". It was made famous in a movie scene with Gregory Peck and Audry Hepburn in the film Roman Holiday. It is the image of a man's face and has been on the wall in the pontifco at the church Santa Maria in Cosmedin since the 17th Century. It is most "famous" for its role as a "lie detector". Tell a lie, and it is purported to "bite off your hand"! So, I was sure to tell the truth when it was my turn. Neither Linda nor I lost any fingers.

After we left the church, we noticed we were'nt very far away from the Jewish section of Rome, so we decided on a "kosher lunch". We found a cute restaurant called the Bocconcino Kosher and enjoyed some Falafal, beer and salad. While there, we had an "fun" exchange with a family from New Jersey. One last chore we accomplished was finding the train that'll take us to the airport. The Italian system is pretty efficient, with trains leaving at :22 and :52 minutes past each hour.

We finished up the evening with a nice "Japanese" dinner!! OK, so we haven't enjoyed the Italian food here that much, but it really doesn't seem to suit our taste. Go figure.