I was up 7:30 a.m. this morning and decided to go to the train station to see if I could get an earlier train. I could have, but was told that the "super speed" train I was on at 9:25 would be faster than an earlier but slower train. So, I had a bit of breakfast and boarded the train bound for Napoli. I was then to change trains in Napoli for Pompei and arrive around noon or so.

Once in Napoli, I boarded the train for Pompei. This was a rickety old train, a local, that made every stop along the way. It shook, rolled side to side and made lound squeaky noises when stopping. BUT, it left on time, so I was pleased. As I saw the stations going by, one by one, I decided to ask about the stop for Pompei.

So, now --- here is the pop quiz.
What does it mean when you see the following sign on a trip from Napoli to Pompei? 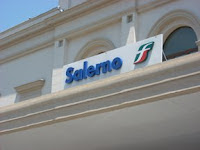 OK, so need a hint! Here's another picture of the square in front of the Solarno train station. 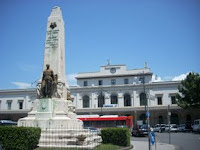 You've missed the Pompei station and gone too far!!
Well, I mentioned all along that I was looking for adventure. I wasn't planning a visit to Solarno, so what the heck. I checked on the next train to Pompei (going in the other direction this time) and found I had an hour to explore. It turns out Solarno is a beautiful city on the Mediterranean. I wondered around a bit, took some nice pictures (one of which you see below) and thoroughly enjoyed the unscheduled visit. 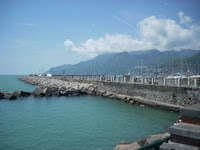 I finally boarded the train, after checking twice that I was on the correct platform, and was rewarded with a thoroughly modern, quiet and very fast train. Pompei was the section stop north, about 15 minutes. Not a bad detour at all.

I arrived in Pompei in short order and was pleased with my navigation skills, at last. T 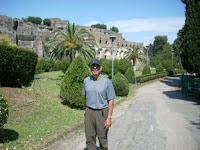 he ruins, it turns out, are a short walk through the new city. New Pompei, as is the case with most cities in Europe I've found, is dominated by a beautiful church in the center of the square. Turning left at the church and walking about one-quarter mile, I entered the Ruins and paid my admission. I noticed there was a "reduced" fare for seniors and was quickly asked by the clerk: "what country are you from?" When I said the U.S., I was just as quickly notified that reduced fares are for EU seniors only. So, pay your 11 Euros, please. I did gladly.

As I wondered around the Ruins, I noticed many folks has an "audio guide" and I was sorry I hadn't ren 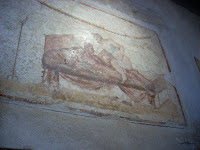 ted one. But, as luck was to have it (another example of right-place, right-time), I happened upon an English speaking tour-guide and joined the group. His English skills were excellent, and he had a great sense of humor. We wondered through the Ruins as our guide pointed out a variety of interesting buildings, adding some historical context and seemed thoroughly knowledgeable in the subject.

Ah, now the interesting stuff. Phallic symbols and brothels (Hey Jeno, I do listen to ya). He was quick to point out that, like other places in the world and through the ages, the "oldest profession" was practiced openly and without dishonor. The "ladies" advertised their skills with pictures over their rooms. Can you intrepret the one just above??

Phallic symbols, on-the-otherhand, related to the fertility of the land an 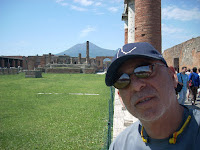 d not the body. An interesting interpretation, but there you have it! From the expert himself.

The picture to the right is yours-truly with Mt. Vesuvius in the background. It is Mt. Vesuvius which erupted in 79 C.E. that destroyed the city. The volcano eruption last for two days, burying the city under a thick layer of ash. After around 3 1/2 hours roaming the Ruins and listening to the guide, I made my way back to Napoli and then Rome 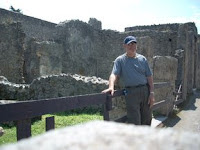 What a great day. Lots of sun, beautiful weather, and thoroughly delightful. Tomorrow I'll make my way back to the Sistine Chapel for another try and see more of Rome.

Posted by Dennis Steele at 12:26 PM No comments: