August 15, 2014 -- Today we were in and around Dublin. We started our day with the smell of food coming from below (we're on the 2nd floor). It smelled delicious and one couldn't resist going downstairs to investigate.  Our host, Nicholas, and his "mum" own Harvey's, and it was Nicholas' "mum" doing the cooking. We enjoyed traditional home-cooked Irish breakfast"  before setting out for the day.

Our first stop was a cute little coffee house for our caffeine fix. We then moved onto the O'Connell Railway Station for some information. Our plan is to take the train to Belfast tomorrow morning for our first Dublin day-trip. I was wondering if "northern Ireland" is a safe place to visit.  "oh yes no worries" is the consistent reply. We'll let you know how it goes! 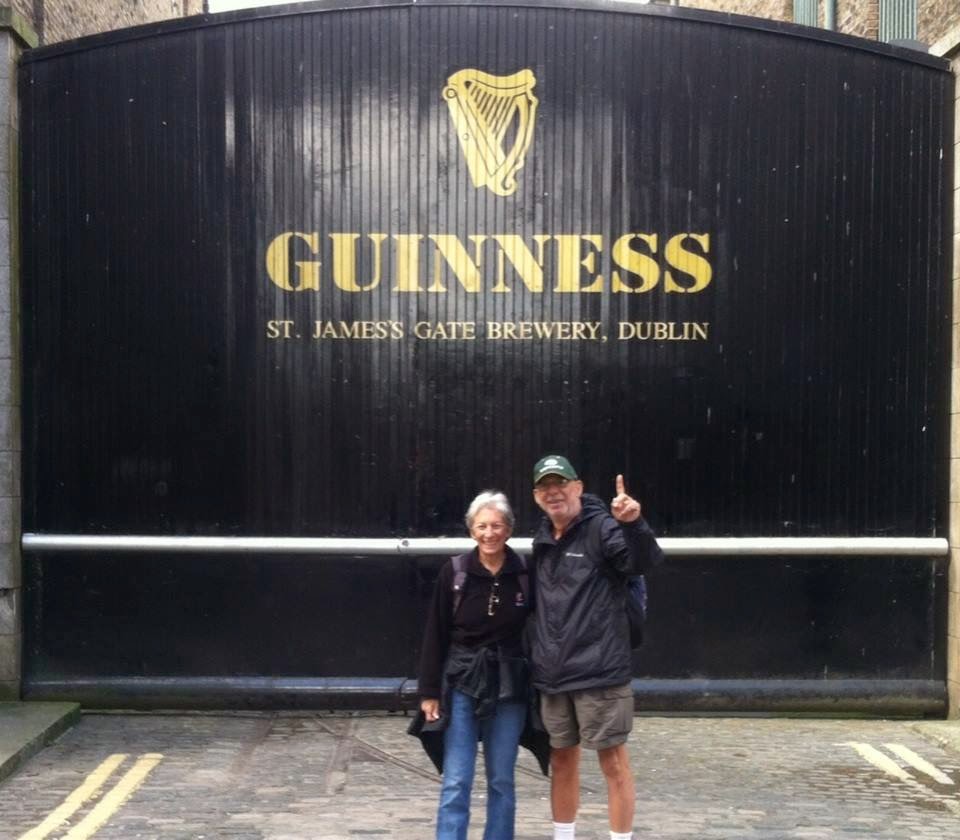 Our second stop was the Heuston Railway Station across town. We took the LUAS light rail for the 15 minute ride and enquired about a day-trip to Galway on Sunday. Both day-trips, Belfast and Galway are around 2 hours each way, and we'll have 4 or 5 hours in each city. We've found that, even though it takes a bit of time to get around Ireland by train, it's better staying in one place and taking day-trips here and there. The trains are pleasant ways to get around -- with the internet accessible and refreshments available from your seat! It's a neat way to travel.

As one leaves the Euston Station and looks across the street, s/he cannot miss the "Guinness Brewery". It is a 55-acre site with an inviting "aroma". We took the 20 minute hike to the Guinness Store and bought two tours (which include a "pint" at the end of the tour). We decided to get the "audio tour" and made our own way around. It's four floors of history, artifacts and active exhibits each telling the story of Arthur Guinness and his "brew".  The brewery was founded in 1755 so there's a lot of history to tell. Guinness took a 9,000 year lease from the city -- so in another 7.248 years, the brewery will have to "renew its lease"!! At the end of the tour we enjoyed our "pints" and, by chance met Gary and John from the U.K. They were in Ireland for the weekend. We enjoyed a 45-minute discussion about travel and "beer" and said our farewells. It was John's 60th birthday, so we drank to his health.

On our return to the City Center, we happened onto the Irish National Museum. We spent an hour looking around the first floor at many of the historic artifacts and descriptions about Ireland and its many struggles. The building itself is "huge", made up of three inter-connected stone structures. Each of the three are massive by themselves, but when put together the museum is an imposing institution.

So, we've completed our first full day in Dublin. It's a wonderful city full of friendly people and interesting things to do and see. The weather is cool with a bit of rain and a bit of wind, but we're lovin' it!!

So, as they say in Gaelic: