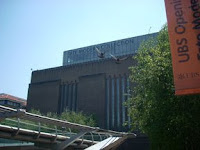 Today is my last day in London. I was up and out this morning at 10 a.m. again. I finally good a good night's sleep. Youth hostels are a good economical way for an overnight stay. By last night, there were 3 other guys in my room -- A guy from Holland (an Egyptian), an Aussie and a 3rd fellow how came in very late. By the time I awoke, he was already gone, so I don't know where he was from.
I went to the Tate Modern Museum this morning. I got there by 11:30 and noticed that a free tour was available at noon. There were about 8 other folks on the tour. They were France, Italy and Canada. I was the only American. We met our tour guide and went through the "Materials Gestures" collection. It included art works by Picasso, Mark Rothko, Claude Monet and Jackson Pollock. A number of other artists were represented, but these were the most impressive. The Tate Modern (there are 4 Tate Museums throughout London with different themes in each) occupies an old power station which provided electricity to much of London. It sat abondoned for many years. After an architectural competition, it was opened as a museum. So, from the outside, it doesn't look anything like one would expect a museum of modern art to look like.
After leaving the Tate, I went to the London Museum. It was within walking distance, so I didn't need to navigate the Underground. The London Museum is different than the British Museum. The theme here was the Great Fire of London and the Plague. It included the history of London from pre-historic times thru the fir 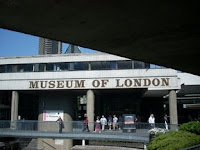 e. Some of the exhibits included present-day information as well.
At about 3 o:clock or so, I thought I'd walk back to the Hostel, but I gave up after about 20 minutes and used the subway to get off my feet. I've noticed an interesting fact about Londoners and the subway. They'll get onto the train, and if the most of the seats are occupied, they will congregate around the doors. So, when one is entering the train, it's sometimes necessary to push past these folks to get onto the train. Meanwhile, the space "between" the doors is not filled with people! I've seen this again and again over the past couple of days, so for some reason its their practice. Another interesting behavior is that, if there is an empty seat and their is someone sitting next to it, they don't move their arms or newspaper. One just needs to "sit down", say excuse me -- or "sorry" (raise your voice a little bit!!), and that's that! But, everyone I've interacted with has been really nice. London is a great town and I'll need to come back again and again to getdown to the real city.

Well it's around 4 p.m., so time to make my way to Paddington Station for a 5:30 train. Better to get there early and have a "cuppa" than be late.