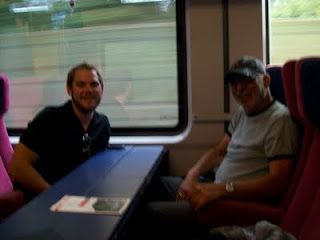 July 28, 2011 -- Milano Italy. Our train was at 9:30 a.m for our transit from Innsbruck to Milano. It was an "EC" train -- a Euro City, which is a fairly fast train. Still, the trip took us 3 hours. We needed to change trains in Verano, but we only had an hour wait, so we were quickly on our way again. We arrived in Milan at 2:30 p.m. and quickly found our lodgings. It is the Hotel Casanova about a 2 minute walk from the "Stazione Centrale".

Interestingly at the station in Innsbruck I heard my name being called!! I looked around, wondering who the heck would know me in this part of the world. It was our new friend Charley Renaud, the law student who had in 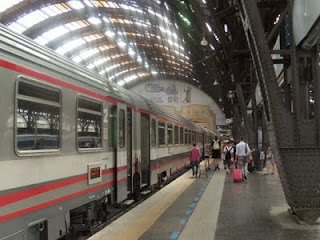 vited us to hear Justice Sajo speak at the University of Innsbruck Law School. Charley is in a summer program in Innsbruck from St. Mary's University School of Law in Austin Texas. Linda and I spent a most enjoyable couple of hours talking, sharing some fruit and getting to know each other.

Milan is a city with a population of about 1.3 million and is the capital of a region called Lombardy. It's an older city, founded around the 3rd Century B.C.E. Today, though, it's a modern and prosperious city with an extensive infrastructure of street cars, light rail, buses and, of course, the Italian railway system. Commerce is everywhere. We're just getting started visiting the city and we'll be here for 2 days. I'm told it is a major fashion and design center with a major influence in finance, commerce, literature, music and sports. So, over the next couple of days we hope to see a lot of the city.