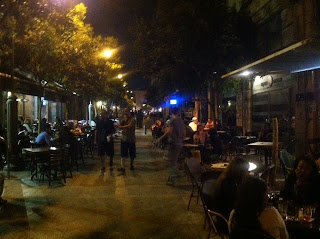 We set out this morning  with a few things to do in mind. Utmost was a trip across town to the Hadassah Medical Center to see the Mac Chagall windows. There are 12 windows, presented by Marc Chagall to the Jewish people and Israel in 1962. We decided to take public transportation and set out to find our way.

It made sense to me that we'd go to the Central Bus Station and get a ticket for the #27 bus. So, we hopped on a tram and rode the few stops to the station. After navigating the crowd, we made our way to the third floor and the ticket booth. "Sorry", said the nice, but curt, lady in the ticket booth. "Take the tram to Mt. Herzl and then the #27 bus." We did as we were told and managed to get back into the train we had just left only a few minutes earlier! Such are the adventures of being a "stranger in a strange land," (with apologies to Robert Heinlein).

We found our bus and fortunately, the Hadassah Medical Center was the last stop. Easy. Once at the medical center, it only took a couple of minutes to find the Chagall Windows Information Desk. We purchased our tickets and entered the Synagogue where the windows are on display high above the floor.

It was a bright sunny day outside. The stained glass windows were beautiful in the morning sunlight. Each of the 12 windows tells the biblical story of Jacobs blessings on his 12 sons and Moses blessings on the 12 tribes. We were invited to sit on the far side of the room (so we could see the first window) and enjoyed a 15 minute commentary about Chagall and the windows. After the commentary, we stayed there for 15 minutes or so, walking around the small Synagogue and talking about the various artifacts and inscriptions on the walls.

I noticed that some people were walking outside and around the windows, so we asked if that part of the display was open to the public. While it was, seeing the "back of the windows" isn't much of a sight. Obviously, the sun needs to shine through so as to transform the colored glass into the magnificent images one sees from the inside. Yet, it was interesting to see the handy-work from the back-side of the windows.

In the visitors center itself, we noticed a couple of Chagall original works of art on the walls. On the same wall was a set of framed Israel stamps, struck and introduced in 1973 and signed by Chagall. There are 12 "full sheets" of Chagall window stamps, one for each of the 12 windows themselves.

As we left the medical center, we found our bus and learned that one cannot use a tram ticket to "initiate a bus ride".  It turns out, in Jerusalem, that one can use a tram ticket on a bus if it is "first used" on the tram. Or, one can use a bus ticket on a tram if it "first used" on the bus! Go figure?! By the time we returned to Jaffe Gate, it around 2 p.m. Time for some lunch and rest. We found that the  Dome of the Rock and Temple Mount are only open for a couple hours each day, so we'll take in those sights tomorrow morning..

Today (Sunday) is the Israeli first day of the week and our last week in Jerusalem. We've done so much and have enjoyed  every "turn in the road". I also realize that, if one is to see Israel properly, it would take 8 weeks or so. Maybe a bit more. But, our 4 week stay will give us a wonderful opportunity to see this country in more detail than we originally hoped.

8 p.m. -- We decided we wanted to do something different for dinner -- Chinese as a matter of fact. We had noticed the "Mandarin Palace" near City Hall, just a few blocks away. It was delicious. As we walked back to the Jaffe Gate, we saw a side street lined with restaurants and pubs. The street was closed to traffic and diners and drinkers were at tables filling both sides of the street.

This time year, Jerusalem is warm and comfortable in the evening, so the streets were crowded with people -- 20-somethings, families and children.

Tomorrow will be an off-day. After seeing the Dome of the Rock and Temple Mount in the morning, we'll venture by public transportation to the Jerusalem Mall for a "look see".