Sunday, May 25, Rome. Well, today is my last day in Rome and I decided to cha 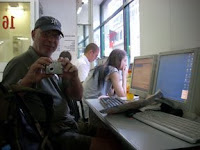 nge things a bit. I awoke later than usual, around 9:30, and caught the bus for Ottavania. I stopped in my trusty internet point and checked my email. Gotta say connected, right? I knew I'd do a bit of walking today and decided that 2 pair of socks was a good bet. It was, and at the end of the day, my tootsies still feel pretty good. Maybe I'm just getting used to walking.

I made my way into a part of town I hadn't been into much. It is an areas called Repubblica. The center of the "Piazza della Republica" is dominated by a large and beautiful fountain with the four bronze statues of the Najadi by Mario Rutelli. One side of the square is large and very old church called Santa Maria degli Angeli is adjacent to Diocletian's Baths. The 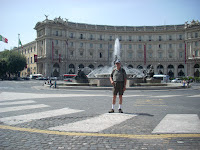 baths were dedicated in 306 C.E. and remained in service until the first third of the Fifth Century.

On the other side o 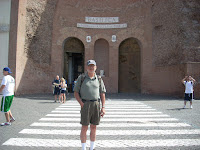 f the square is another church, one that I became very interested in. It is called the Warner Moderno. The interesting about this church is that they, somehow, display images and tell stories that are either in the past, present and even the future. I found that the doors would open at 2:30 p.m. and that I would be able to worship at 4:10 p.m. --- more on this later. 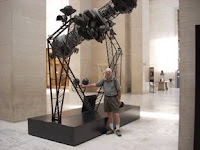 I was able to locate the Museum of Science and Planetarium of Rome. It turns out the museum is quite a bit out of city and wasn't on any of the maps I had. I stopped at the tourist information booth at the Roma Termini and was told the museum was at the end of one of the two s 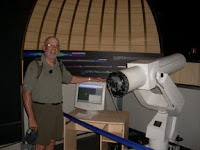 ubway trains that span much of the city. Since I had a 4:10 appointment at the Warner Moderno Church, and it was around 1 p.m., I boarded the subway and headed out there. It was about a 15 minute train ride and then a 10 minute walk to the museum.
The science museum and planetarium are housed in an imposing building. Huge columns boarded the sides as I walked into the door. I was greeted by a "antique" Zeiss Planetarium project. These were very popular in planetariums. Using 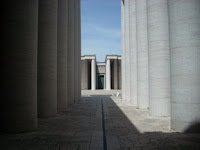 a word like "antique" when talking about a plentarium projector that was built in the 1920's or 30's is a bit of a stretch when here in Rome. The one on display is the same projector in grew up on at the Griffith Planetarium and Observatory in Los Angeles. While these are no longer in use, it is hard to find a well-preserved one. The one in Rome is very nice and all original. I was told it was given to Rome after World War II by the German government as a gesture of friendship. I thoroughly enjoyed my visit to the planetarium and science museum.
So, by now it was close to 3 p.m. and time to my way back to the Repubblica Metro stop. If you recall, I had an appointment to worship at the Warner Moderno Church -- more like a Cathedral really -- at 4:10. I arrived there a bit early, around 3:35, and had a snack. I paid my 5.50 Euro fee to gain entry and entered the viewing chamber precisely at 4 p.m. At 4:10 the images began to display on the wall. They were images of the past, 10 feet high and 15 feet wide -- more or less. The images began to tell a story of events which had happened in 1957. Again, given that I was in Rome, these are very ancient images, but they told the story in exact detail -- there was even color and sound.

Indiana Jones and the Kingdom of the Crystal Skull. 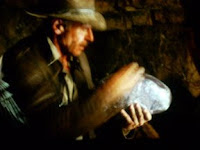 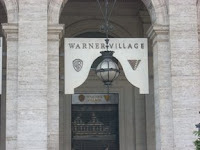 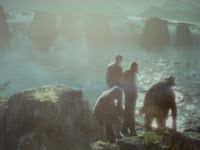 It so nice to end a week in Rome with a religious experience! Si?
Posted by Dennis Steele at 10:32 AM No comments: