As mentioned in an earlier post, we'll try again today. We had a few hours to kill, so we decided to take in the "promenade" in Santa Monica. The promenade is about 4 blocks long along 3rd Street -- just a block off the ocean. For the last 25 years, it's been a tourist attraction as well as a wonderful playground for locals and visitors alike. Shops of all type about -- restaurants, Starbucks (of course) and more. Street musicians entertain passerby for tips. I was told that 6.3 million visitors wander the shops annually -- with 3 million International visitors.

We made our way back to the airport about 3:30 and, once again, visited the United Lounge to wait for our flight at 5:45 p.m. During our visit we were told that, finally, our plan did leave last night -- 7 hours late. This was after we were advised to "rebook" and find a hotel!!

Hopefully, the next blog entry will be from London Heathrow Airport. We'll make our way to Cork and get this adventure underway. It'll be fun. And heck, even a layover in Los Angeles was an adventure in itself. We saw some sights we might not otherwise see -- so what the heck!!??

More to come
Posted by Dennis Steele at 4:36 PM No comments: 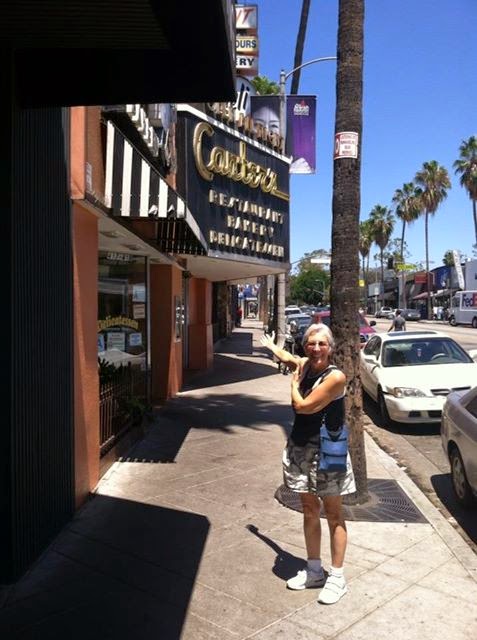 We've had a "slow start" to our trip to Ireland, the U.K. and Scotland. As planned, we left for a "sleep and park" day before our departure. Our plan was to visit Canter's Deli and Farmers Market in Los Angeles. That part of our adventure worked out well -- we enjoyed a delightful lunch at Canter's and coffee at The Grove, adjacent to Farmer's Market.

The following morning, Wednesday, our plane was to be at 5:45 p.m. so we had a good part of the day to discover other parts of Los Angeles. Many of our friends had talked about "The Original Pantry" in downtown L.A., so off we went in that direction.

It turns out The Pantry is a delightful little "joint" that was founded in 1924. We made our way through the freeway system to the restaurant. Even though it was only about 12 miles -- we chose to go in the earlier morning during commute hours. But we made the trip in good fashion. The food was just great. We had a veggie and cheese omelette that fed us both!! 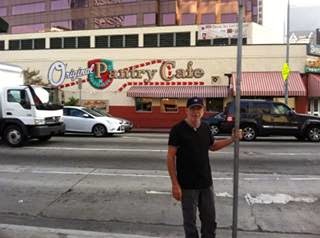 We wandered around the downtown neighborhood for a while and finally decided it would be a good time to make our way to the airport. We thought if we arrived about 2 p.m. we could spend some time in the United Lounge before our flight.

Since we had a "sleep and fly" deal at the hotel, we parked our car in the garage and took the shuttle to the airport. It was easy to find the United Lounge and we spent the next couple of hours enjoying complimentary coffee and snacks.

Finally, it was time to head toward the gate and board the plane. I had arrange a more comfortable accommodation in the "exit aisle" and, once we got through security and were boarded, we settled in to enjoy (or maybe a better word is to "endure") our 10.5 hour flight to Heathrow. But -- wait -- 5:45 p.m. came and went, and we hadn't moved! Finally, the captain came on the intercom to announce that, in fact, did we notice we were still at the gate? It turns out that a window in the cockpit jammed and needed repair. It would only take an hour.

So, one hour turned into two, then four and finally at the five-hour mark the airline admitted that the flight would be cancelled. They'd give us a food voucher and hotel voucher -- but we had to find our own hotels! Or, if we wished, we could stay in the airport overnight with pillows and blankets.

Linda and I made our way back to the United Lounge and got our flight changed for today, Thursday -- same time, but we hope it's not the same plane. After a few minutes on the internet, we found some lodgings in Long Beach and decided it was a good time to get some rest. So, we'll try again today! Who knows, maybe we'll get to Ireland yet!!


Posted by Dennis Steele at 9:27 AM No comments: