Today we walked the ENTIRE length of the Freedom Trail. It may only be 2.5 miles, but it feels like quite a bit longer.  We started out walking tour at 10 a.m. and finished a 5:15 p.m. We walked from the "Common" to Bunker Hill - on the other side of town.We picked up the trail in Boston Common -- the beginning of the trail. We bought a descriptive map of the trail and were able to get a considerable amount of information on each of the 15 major attractions along the way.

The first stop is the Sate House, The State House was built in 1798 and displays a roof that is made with copper (applied by Paul Revere) and now has a 23-karat gold overlay.  We progressed along the route and found the site of the first public school built in 1635. This is an "old city" and one can spot sites, buildings and statuary attesting to its history. Along the route, Linda and I discovered the offices of the Jewish Advocate, a weekly newspaper in publication for over 100 years covering Jewish news from home and around the world. We had a unique opportunity to tour their editorial offices and enjoy a few minutes with one of their writer/editors. 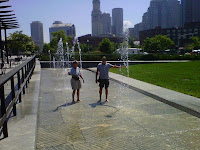 We stopped at the Quincy Market for lunch but didn't find anything to our liking so we were off again. Just as we were entering the north-side of the "trail", the Italian section, we saw a delightful water fountain and took a couple of minutes to take off our shoes and cool ourselves in the  refreshing water.

Close to the end of the trail, we entered the Charlestown Navy Shipyard, the home of the USS Constitution.   The shipyard has been operating for 174 years, building, repairing and refitting ships for the U.S. Navy. The Constitution is the oldest commissioned warship in the world, originally commissioned in 1797. During the war of 1812, the Constitution defeated four British frigates -- canon balls were "bouncing" off her sides she earned the name "Old Ironsides". After we viewed a 10 minute film about the shipyard, we boarded the Constitution and toured three of her decks.

Our last stop was "Breeds Hill" (also known as Bunker Hill). We rested there for awhile then walked back across the river to the "orange line" of the "T". We had walked enough for the day, and decided to take the Metro back to the Inn. It has been a long and enjoyable day, and we're both ready to take the rest of the evening in our lodgings -- watch the Olympics on TV and get ready for our adventure tomorrow. We intend visiting Cambridge, see Harvard University and hunt down "Dewey Cheatem and Howe"! You know who they are, don't you????
Posted by Dennis Steele at 3:59 PM 1 comment: