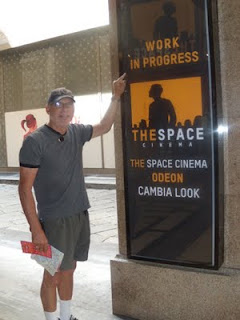 July 30, 2011 -- Milano, Italy. After getting up a bit late, around 9:30 a.m., we had a quick breakfast and set out for the Duomo. This time we decided not to walk, and we decided to take the "underground" from the train station. Our first goal was to locate the famous "Odeon", the English language cinema, to see if we could see a film later in the day. After a look at the map and a question or two, we found it only to discover that it was being "remodeled" and was closed for the next few weeks!

OK, no problem, we saw on the map that the "Planetario" wasn't too far away from the theater, so we continued walking down Corso Vittorio Emanuele II toward the Giardini Pubblici where the planetarium is located. The "Corso" is a wide walking street with high-end shops all along the boulevard. It eventually lets into the Corso Venezia and then the public gardens.

We found the planetarium in short order and noticed one of the two metal doors was closed, so 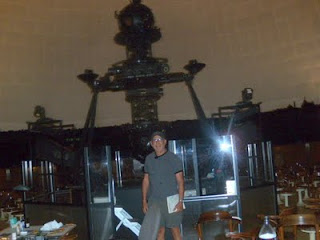 undaunted we headed through the open door and into the lobby. So, to make a short story even shorter -- the planetarium was "closed for remodeling" too!! Luck would have it that two workers were by the projector and we gained entrance to the theater. We took a couple of pictures of the projector and around the lobby. The planetarium projector is an older Zeiss, much the kind that was used at the Griffith Planetarium when I was a kid. I've found that, throughout Europe, there are large number of the old Zeiss projectors still in use.
We caught another subway train back to the Duomo and had a bite of lunch at one of the many cafe's along and around the Piazza. As has become our custom over the last couple of cities, we decided to take one of the double-decker buses around the Milano. The tour included 20 stops along two differe 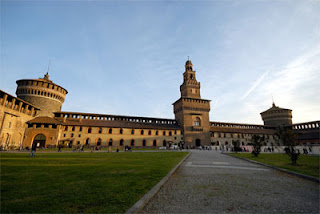 nt routes. One stop was the Castle Sforza. Construction on the castle began in 1450 by Francesco Sforza. Over the next few centuries it was used in defense of its inhabitants, but now is the location of a museum which includes the last sculpture, the Rondanini Pieta.

In front of the castle is a large beautiful fountain. It's been a warm day, and quite a few people were sitting on the edge of the fountain, some with their feet in the cool water. Linda and I cooled ourselves with the water and had a minor "water fight". It was great fun.

This is our last day in Milano. We've found Milano to be a large urban city, more so than any of the other Italian cities we've visited so far. Even Munich seemed less "business oriented". Yet, there were thousands of tourists enjoying the Italian summer. The warm days bring them into the numerous squares to enjoy the city. The Piazza Duomo, the largest square in Milano is home to the large Cathedral of the city and brings what seems to be all of the many tourists to see its elegance.

Tomorrow we'll be in transit to Bologna. So, as always -- stay tuned!!
Posted by Dennis Steele at 8:24 AM No comments: