The day started at 7 a.m. I managed to drop my 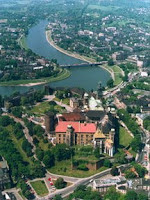 camera from the bed to the floor, a distance of only 12 inches, and the LCD screen broke. The camera is useless, so it's time to buy another. I'll need to find one I can use in the U.S. as well as Europe..

I boarded the train at 9:08 a.m. and started the 5 hour journey to Katowice. I'll need to change trains for Krakow and should arrive around 4:21 p.m. It's been a quiet journey so far. My compartment is filled with 5 other guys going into Poland. They've been talking non-stop since they boarded. At first it was a bit distracting, but I put on my earphones and am listening to a pretty good FM st 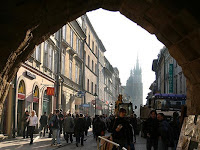 ation that, for some reason, doesn't seem affected by the fact we're traveling across 2 countries! I just turn up the volume a bit, and my compartment quiets down with the music.

I've heard a couple of times that Vienna is the entry point to Poland and the East. I realized a bit ago that it is very possible, probable really, that I am following the same train routes the deportees took on their way to Auschwitz! I've been thinking about this for the last hour or so and it forces me to reflect on all the stories and reading I've done over the years. I think about those who were here before me. The whole thing started when we went through a small town and I saw a cattle car on a rail siding. It's funny how the mind can play these kind of tricks on you. I'm typing on my pc on the train right now, so I'll put this away until later.

Well, it's later! I arrived in Krakow at around 5:30 p.m., about an hour late. I found the tourist information booth and asked about the location of the hostel and a place where I can buy a camera. As it happens, the train station is right next door to the largest shopping mall, the Galleria, in Krakow. So, I was able to buy the same camera I have now, only the new version. I'm not sure what it cost me, as I paid in local currency -- the Zlotty!!

I didn't know what to expect when seeing Krakow for the first time. All the way here on the train, the little towns and cities we stopped in seemed very remote. They appeared to be small bedroom communities, so I thought Krakow might be the same. Well, as usual, I was wrong. Krakow seems to be a sizable modern city. I mentioned the shopping mall, for example, it was huge, lots of people and prosperous. I was surprised to be honest. The hostel I'm staying in is on the main town square. The square is very picturesque, lots charm and expensive looking restaurants.

I'll be here for 3 nights and 2 full days. I will be going to Auschwitz tomorrow, and then on Sunday explore the rest of the city, including the Jewish section. There is a lot to see here, so I'll have a full couple of days. I'll also inquire about any astronomy clubs, observatories and planetariums, although these are my second priorities.

Posted by Dennis Steele at 9:27 AM No comments: