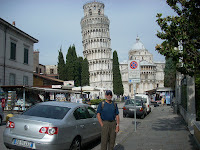 Monday in Pisa Italy. Yesterday Roger and I awoke and had a quick continental breakfast with Jean-Marie and Michelle. We said farewell to his guests and started out for Dijon. I had found that a 10:30 a.m. train was leaving for Pisa by way of Lyon and Turino. An interesting turn was that the leg of the journey between Lyon and Turino was by bus. At first I thought it would be a mess, but the bus was modern and comfortable. We arrived in Turino after a 4 hour journey.
I boarded the train for Pisa at 7:05 p.m. and settled into a nice cozy compartment. Durin 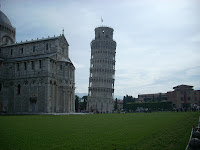 g our trip south, I busied myself playing game after game of Sudoku and lost a track of time. At one point, I looked up to see that we were headed to Pisa along the coast of Italy. I looked up to see the Mediterrean Sea on my right! More than that, the full moon had risen and seemed to be lighting our way. We passed through many little towns along the way, through many tunnels and over small bridges. At one point, don't forget it was Sunday night, there was a huge fireworks display in the early evening. It thought it was nice of the Italians to welcome me that way! Don't you?
We arrived in Pisa Centrale at 11:30 at night. A quick cab ride, I was at the Hostel and asleep by 12:30 or so. This morning I was up and out at 8 a.m. The hostel I've found to stay in is 800 meters from the Leaning Tower, so I walked into the old city. Coming around a curve and looking in the distance, I saw the Leaning Tower of Pisa for the first time. It was a thrilling and overwelming sight!

Now it's around 11 a.m. and I am on the way to the train station to find out when the trains leave for Rome in the morning. I stumbled into this little cyber-cafe, and decided to catch up on my blogs. Once I return to the hostel this evening, I'll finish up the days events --- so, as always, stay TUNED!!

Pisa, 3 p.m. and back at the hostel. I've had a very interesting, enjoyable and educational aftenoon so far. After I posted the early part of this blog, I continued to the train station and found that there is an 8:55 a.m. train directly to Rome. I bought a 1st class voucher, needed in addition to my Eurail pass for 5 Euros, and headed back to the walled old city of Pisa. On the way, I figured out how to use my Europe cell phone as an alarm clock and got the phone number of a taxi company. I called just to be sure they spoke enough English or I spoke enough Italian to get a cab in the morning. Thankfully, they spoke a good deal of English. Hopefully the dispatcher in the morning will be just as good.

Once back in the old city, I thought it was time for a sit-down and a beer, so I walked into a "restorante" and found I needed to pay at the register for a beer. At the time, I was asked if I wanted to buy it at the bar, and I said I did. The beer cost 4 Euros and I gave the casher a 20 Euro bill. He gave me 6 Euros in change and we discussed the concept of "addition and subtraction". I pointed out that 20 Euros minus 4 Euros is 16 Euros. A couple of "no comprendi's" later, he gave me a 10. Lesson learned -- follow the money!!!

Once I had my beer in hand, I turned to walk outside and sitdown at table to enjoy the brew. Another employee of the bar, a woman this time, chased after me, telling me I had to stand at the bar. Afterall, I paid for a beer at the bar and if I wanted to sit, it would cost me extra!! OK, I got that and stood at the bar enjoying the drink and doing some people watching.

A fellow next to me was enjoying what appeared to be a small glass of wine and he had been given some peanuts to enjoy with his drink. When he left, I pointed to the peanuts and asked another woman behind the bar -- "OK??" She said "si si". Two peanuts later, the bartender, a guy, took the peanuts and when I asked for them he said "not with beer, only wine!" "But the lady said OK," I said, and he pointed out that "no, she's a-crazy!" So much for the peanuts. I shrugged my shoulders and laughed, and finished my beer. The bar tender starting talking to another co-worker in pretty rapid Italian. I heard the word Americano, but figured they were enjoying my ignorance and good nature. Or maybe they figured I was "a-crazy" too!! 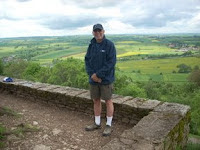 May 17. Saturday. I awoke around 9:30 a.m. and had a nice breakfast with Roger. It included coffee, a roll and yogurt, and was just enough to make me feel we had enough in our stomachs to start our day. Jean-Marie was there to greet us in his rough voice, big smile and good nature.

Around 10 o:clock or so, Roger and I set out into the French countryside. Roger suggested we visit a 14th Century chateau called Chateauneuf. It was around 30 miles to the east. As we set out on our journey, we took a turn off the main road and into the back roads of the countryside. As we passed through small villages and hamlets, I couldn't get over the beauty of the surrounding meadows and rolling hills. As before, they were every color of green, with dark brown soil. The meadows were cover with cows, cattle and sheep. It is everything one could imagine about the remote countryside of France. 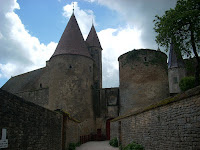 As we got closer to our destination, we were able to make out the chateaus in the distance. It was atop some hills and made for an imposing site. Chateauneuf was built in around 1341 and around 300 years later, the “Lord of the Manner” built dwellings around the chateaus for his workers. The dwellings became a part of what was to be a “walled city”, and the gates to the city still stand today. The views from the property are breathtaking. Chateauneuf is considered an historical site, but people still live and work there. Not as serfs, of course, but shop owners and residents.

Roger and I stopped for a snack (and yes, a beer) at one of the two restaurants we saw on the windy roads of the chateau. The waiter, who turned out to be the owner, was a young Englishman around 30 years old. I asked him what had brought him to this beautiful, but somewhat remote, place. He explained he had come to Chateauneuf 16 years ago to be a waiter at one of the 2 hotels there. From that beginning, he met his wife and together they bought the restaurant we were sitting in.

After around an hour or so of looking around, Roger and I started down the hill with no particular plan except for the possibility of stopping in one of the small towns for some sightseeing. The idea of getting an early start on my way to Italy was brought up, and we decided to go into Dijon to check out the train schedules for the following day – Sunday. I was able to make my way to the train station and found out that a train for Pisa would leave in the morning at 10:30 a.m. It'll be a long journey with train changes in Lyon and Tourin (my first stop in Italy). I'll arrived in Pisa at 11:30 p.m. I made a reservation for 2 nights at a hostel 800 meters from the “Leaning Tower”, and will leave for Rome on Tuesday.

After getting back to Jean-Marie's and Michelle's at 7:30 or so, we enjoyed dinner with our friends from the night before. Let me take a moment to describe a typical French meal in the evening. Our dinner for the last two nights, started at around 8 p.m. with drinks of Pastis outside the kitchen overlooking the countryside. After 45 minutes or an hour, the 10 of us sat at the dinner table for an appetizer. Then the main dish followed by cheese and bread. The main course is followed by dessert. Of course, wine is served throughout the entire meal, and then finally an after-dinner liquor is served.

During the entire meal, much discussion is carried on by the hosts and his/her guests. Jokes, stories, lectures and more jokes finish the evening. As we made our way back to the RV, I realized that dinner had taken us until 11:30 – around 4 hours in all
Posted by Dennis Steele at 1:19 AM No comments: 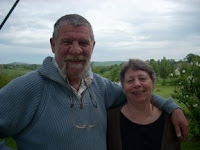 Today is Friday May 16th. Roger and I spent a good part of the day driving into central France on the way to the Chambre d'Hote owned by his friend Jean Marie. Jean Marie is a 59 year old Frenchman who has lived in the area most of his life. About 6 years ago, he and his “lady friend”, Michelle, bought a large older farm house on 4 acres of land in a little hamlet called Jonchery. Over a period of 3 or 4 years, they turned it into a beautiful “inn” with two or three rooms for guests. Chambre d'Hote is a descriptive term which has the same meaning as an “Inn”, or bed and breakfast. They can accommodate up to 8 people at any one time. 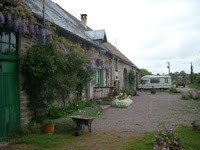 Along the way, Roger and I stopped in a larger city called Saulieu. It is a beautiful town about 3 hours south of Paris and about 35 miles west of Dijon. We enjoyed a beer at one of the local pubs, and I enjoyed some chocolate éclairs I found in a local bakery shop even more. As we were getting ready to walk back to the RV, there was a cloud burst, and it rained for about 10 minutes or so. Once the rain eased, we continued our journey to Jean Marie's. We arrived around 5 p.m. or so.

We met Jean Marie, Michelle and their dog “unique”, and sat down on patio in the rear of the house. The patio looks over the countryside of light and dark green grasses and other foliage. There is a farmhouse next door and a horse was just a few feet away. No other people were to be seen, and the area is lightly traveled. Jean Marie's 4 acres are absolutely stunning, and every now and then we could see a streamlined polished si 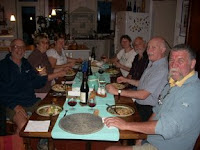 lver color train streak noiselessly by. It was an exceptional site, and one I will not soon forget.

Later in the evening, around 8 o:clock, 2 other couples arrived and we sat down for dinner at the 10-foot table. Michelle arranged a beautiful table, and with Jean Marie's help, dinner was served. It consisted of drinks, a main course followed by cheese and after-dinner liquors. We spoke of politics, countries, peoples, language, science, industry and, often laughed and agreed or disagreed on just about everything. Dinner lasted until midnight, and we then all decided it was a good time to call it quits and get some sleep.

You can see there Jonchery, and the Chambre d'Hote is, by clicking here.