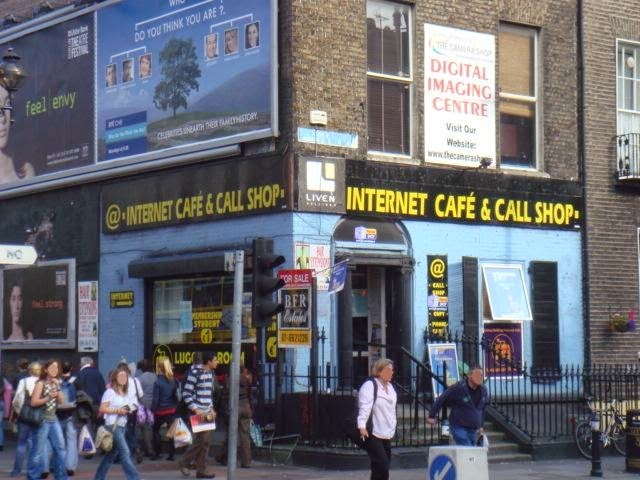 August 17, 2014 --  9 a.m. --As always, we were out and about early this morning. We found a cute family-owned "joint" for an Irish breakfast and headed to the bus depot. An "Irish breakfast" consists of an egg, a square of hash brown's and a piece of toast. One can choose to have sausage if they wish. It's pretty good and can be found everywhere in the cities.

Our plan was to hang around Dublin or see if we could get to Kilkenny and back on a later bus. We found we could get a noon bus for the 1 hour trip to Kilkenny. We're told it's a beautiful city, so we're looking forward to the visit. Since we had a hour-and-a-half to kill, we walked a couple of blocks to an Internet cafe for an on-line "fix". Internet cafe's are plentiful in Dublin and one can enjoy the entertainment of the Internet for 1-Euro per hour.

9:05 p.m. -- We've just returned from Kilkenny, a bit south of Dublin. The bus journey took us 2 hours (I originally thought it was one hour!), but as we walked into town, we were greeted by a most beautiful little city.  The population of Kilkenny is 9,000 residents and is in the southeast part of Ireland.

A prominent landmark is the Kilkenny Castle. The castle, built in 1195, is a beautiful building on the River Nore.  As is usually the case, the castle was originally built to guard the small city. The river was used for trade and was defended by the castle as well.  In 1967, the Kilkenny Castle was transferred to the people of the city for £50 and has been used as a conference venue, awards and conferring ceremonies for the graduates of the "Kilkenny Campus" of National University. We enjoyed our visit there very much.

We happened into town on the last day of an arts and cultural festival. It was fun seeing the artists showing their works along a long wall adjacent to the castle. As we explored the narrow streets along the river and into the city center, we happened onto a "sign" espousing the virtues of Kilkenny Beer. We took a break and enjoyed the brew. It was especially delicious. We were a bit disappointed to learn that Kilkenny no longer brews its own beer -- but the company is now owned by a larger "out-of-town" conglomerate!! Too bad, I thought.

After spending another couple of hours of exploration and made our way back to the bus depot for a 6:30 p.m. return to Dublin. We were lucky as we were able to transfer to an "express bus" and the 2-hour journey was cut to 1 1/2-hours.

(As an aside, I was interested as to why so many Irish cities begin with the prefix "Kil" or "Kill".  There's Killarney, Kilkenny, Killabben -- and about 85 others throughout the country. It seems that during the Gaelic Period there were very few large towns or settlements.  Most of the small settlements were referred to by a notable feature of the landscape. The term "Kil or Kill" refers to a church-yard, graveyard or woodland! Interesting huh??.)

Tomorrow we're off on another adventure -- to Birr and the Birr Castle. Notable here is that it is home of Lord Rosse's 72" telescope. Built in the middle of the 19th Century, it was the largest telescope in the world.  In 1910 the 100" Hooker Telescope on Mt. Wilson took away that distinction.

So, check back. You never know what'll take place!!
Posted by Dennis Steele at 1:24 PM 2 comments: