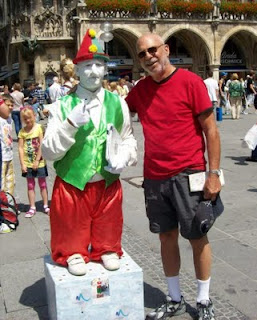 July 27, Munich Germany. Today we´ll spend the day in Munich. We left by high-speed rail at 10:30 a.m. It´s a 2 hour trip from Innsbruck. Along the trip to Munich, we met and had a nice discussion with a retired doctor. He has been in Innsbruck on a "geneology" trip for his family. I didn´t get his name.
Once in Munich, we made a bee-line for Starbuck´s and had our second "American-style" coffee since this trip began on July 6th!! I wasn´t used to the caffiene and it got my heart-rate going right off the bat. Still, it tasted good! Outside the station, the weather was sunny and warm, so we were pleased to be out of the colder weather of Innsbruck.
After a quick stop by the Tourist and Information Center, we made our way into town. Our first stop was the main square where the "Glockenspiel" is located -- Marienplatz. The Glockenspiel consists of 43 bells and 32 life-size figures. At certain times of the day there is a 15-minute "performance" put on by the "clock". Along the way, one can hard miss the activity and energy. The street, Neuhauser, wa 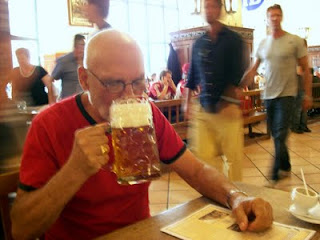 s loaded with people. Shops were everywhere and people were enjoying the cafe´s and activities along the way.
It´s interesting to mention the street performers -- we found a pianist playing classical music for the crowd. He talent was more than evident and the crowd enjoyed the performance. Not too far away a young women and man were singing "opera" with a piano accompaniment. They were excellent as well, as we listened for a little while. Finally, there was an Asian group -- Chinese maybe -- playing three instruments I really didn´t recognize.
We wander around the "platz" for a bit and made our waz to the Ha 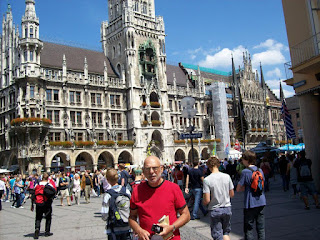 ufbrauhaus. This is a famous "bier haus" founded by Wilhelm V in 1589. Mozart, for instance, lived nearby and made the place famous in the late 18th Century. Other notables made appearances there as well, one of them too "infamous" to mention -- but you should be able to ascertain his name by my reluctance to even "spell it" in this blog!!
The place was packed, but we took the time to find a place to sit and got the waiter´s attention. A "liter" of beer was 7.60 Euros -- about $11.00 -- but it was well worth the investment. Linda and I shared the beer as well as a snack. We sat at a table with another couple and struck up a nice chat -- even though they onlz spoke Italian. A couple of guys at the next table toasted us and we bought them a beer. Great fun. 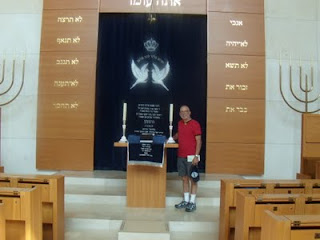 Once leaving the Hofbrauhas, we found the "Viktoalien-markt", an open market full of vendors of all kinds. Everything was available -- fruit, gelato, flowers, food of all kinds and clothing. Here again, the place was growded and the activity for an enjoyable visit. It was in the market that we saw the "opera singing" trio.
It turns out the market is close to the Jewish Museum and Synagogue, we we found them both and slowly walked through the museum. Its three floors explore the Jewish experience in Munich -- an experience that was troubled and difficult until after the Second World War. Across the plaza, we entered the Jewish Community Center and were able to visit the sancturary of the Synagogue. It´s interesting that one gains entrance to the synagogue through an underground tunnel -- but first it´s necessary to pass through a rigorous security check. We´ve noticed that the Jewish community in Austria and Germany is protected by an extensive security system.