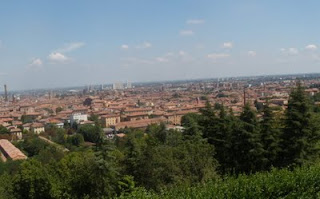 August 1, 2011. Bolgona, Italy. Well, it's hard to believe that it is August 1st!! We've been in Italy, Austria and Germany for the last 22 days, and we'll be returning to the U.S. on August 8th. But, we're still in Bologna and still enjoying our stay. We arose early this morning and enjoyed the hotel's continental breakfast. As usual, it was delightful. It turns out, also, that the hotel has a neat little "modem" that one can rent for 5 Euros a day. Just plug it into the A.C. and enjoy broadband internet connectivity in the room. Having high-speed broadband is always enjoyable for me -- I get to check into Facebook and read my email regularly.


Last night, when reading about the various museums in the Bologna area, we discovered many of them are closed on Monday. This being Monday, we figured we had chosen a "bad time" to spend our only day here. But, undaunted, we set off for the Jewish Museum we discovered yesterday. As we approached the museum, after a 10 minute walk from the hotel, it looked closed but some windows were open, so I knocked loudly on the door and asked if "anyone was there". Some one came to the window and motioned us to "pusha the buttona". We did and gained entry in just a few minutes. 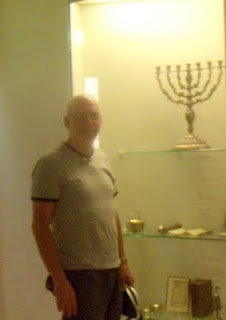 The Jewish Museum of Bologna is located on Via Valdonica, in the area of the former ghetto. Information at the museum states that it was formed to conserve the Jewish heritage and culture that has been part of Bologna for centuries. There are few artifacts in the museum, but a rather complete description of the Jewish experience -- both in Europe, Italy and Bologna. The story seems to be the same everywhere one goes in Europe. The Jews were accepted, rejected, expelled and ghettoized in every country. Italy is no exception. Now Jews are accepted once again and in most instances somewhat "protected". We finished our time at the museum with a look in their gift shop and left after saying our "good byes" to the curator.
Once again, we decided on a double-decker bus tour of the city. It turns out that Bolog

na is a much larger city that we first thought. It is the 7th largest city in Italy with a population of more than 1-million. Bologna is famous for its towers and porticoes, its many churches, a historical downtown and, of course, its food. The city even has a "leaning tower", built in the 12th Century. The bus took us around Bologna, up into the hills overlooking the city and into the fancy residential and shopping neighborhoods. The open-air bus was comfortable and we enjoyed the time we spent seeing parts of the city we didn't know existed.
Tomorrow we're on the way back to Florence. We've made a reservation at the same hostel as before. It's comfortable and centrally located. A couple of days later, we'll be back in Rome for the remainder of our trip. Time -- I can attest -- passes too quickly!!

Ciao for now, i miei amici!!

Posted by Dennis Steele at 4:33 AM No comments: