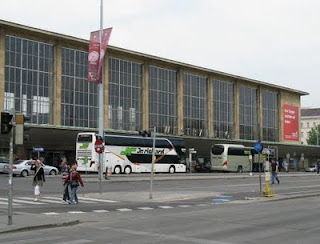 July 23, 2011. Innsbruck, Austria. Our train was at 11:50 a.m., so we started the day with a morning coffee and a trip to the Cyber Cafe. In Italy these are called "Internet Points". Throughout the country, so far, we've been able to find Internet Points just anywhere we've gone Verona is the exception, but as we walked the city, we saw an Apple Store and got our email and Facebook fix!

In order to get to Innsbruck, we needed to go back through Verona and then board the train for Munich. As mentioned, there was a railway workers' strike yesterday, but we learned that the train for Munich would be in Verona at :59 past the house. We arrived in Verona at 11:57 a.m., so we thought we probably missed the train for the hour. A look at the track assignments told us that the train would be on track #3, so just for the heck of it we made our way up there. The 12:59 p.m. train was still in the station so we jumped on board! It was a lucky moment as the next train would have been 2 hours later. As it is, we'll get into Innsbruck at 4:30 p.m., so it's a 3.5 hour train ride.

We found a couple of seats and settled in for the trip. The rail-car was very hot and stuffy, but we figured it'd get better once the train got underway. No such luck! The conductor told us the air-conditioning was out of order and the lights did not work. The entire c 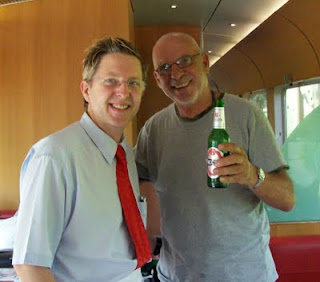 ar was asked to leave for other parts of the train. Linda and I waited for the crowd to "scramble" and then made our way toward the front of the train. It didn't take long to find seating and we made ourselves comfortable again. I saw a man walk past with a cup of coffee and learned the "food car" was 2 coaches ahead, so I went looking for a snack.

It was then I found the "first class coach". Our Eurail Pass qualifies us for first-class accommodations, so we moved again -- this time to the relative comfort of a much less crowded rail-car, reclining seats and electrical power for my netbook. Linda and I enjoyed a tasty lunch in the food-coach and met Horst, our waiter/cook. We had a nice chat. It turns out Horst is a Rod Stewart fan and follows Stewart around the world for his concerts. Horst will be in Las Vegas in couple of months for a concert or two. I gave Horst my card and offered him a sight-seeing tour of the Palm Springs area if he comes to town.

One of the most enjoyable aspects of our travel, so far, has been the interesting people we've met.

We arrived in Innsbruck Austria at 4:30 p.m. and found our lodgings. It's located perfectly, near the Arch de Triumph, right downtown in Innsbruck and near the train station. After a bit, we went for a walk. This part of the city, I think 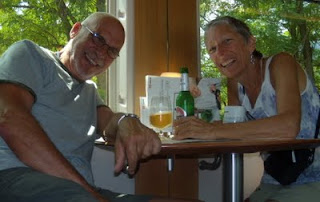 it's the downtown section, is absolutely deserted!! Unlike Italy where people were in the streets, shops were open, entertainment was everywhere -- Innsbruck is a very VERY quiet place right now.
Our plan is to be off to Munich in the morning with a visit to the Dachau Concentration Camp. The camp is about 35 minutes away from the city of Dachau by bus. We'll also take some time to see Munich.