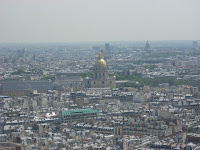 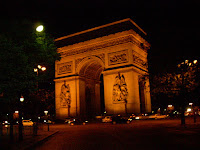 Today is Wednesday May 15th, my first full day in Paris. Roger and I went out last night, after we arrived at the camp site, and walked along the Champs Elysees until we found a cute cafe on a side street called Rue de Franklin Roosevelt (turns out the French love our early presidents).

A note about the French and how friendly they are. They ARE friendly -- very friendly. I've found Paris to be a busy, beautiful and tolerable city full of busy people. I've learned enough French, very little mind you, to get started with shop owners and in the cafe's. From there, they speak English to me and help me with my French. It's very e This morning I spent a bit of time in a cafe enjoying a "Cafe' noir" and then found a tour bus that took me around Some of Paris. I got off the bus at the Eiffel Tower. I decided I'd go to the top, no matter how long the wait. After getting in line at 10:45 a.m., I finally arrived at the upper-most part of the tower at noon!! Quite a wait, but it was worth it. The views from the tower are amazing. I was back on the tour bus by around 1 p.m. 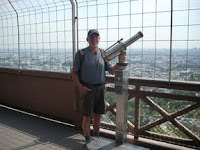 There is so much to see here. The city is huge and busy. I bought an underground ticket for 2 days, but I find the map very confusing. Stations are sometimes not labeled and it isn't clear which train goes where (very much unlike London which was well marked, easy to use and efficient).
I've been very lucky with the weather. Ever since I arrived in Europe, but especially in London and on the continent, the weather has been beautiful -- warm and sunny. While 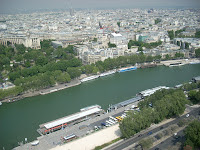 there was a threat of rain, so far none has come to pass.
Tonight I'll study the maps a bit, and try to figure out what to see tomorrow. I know I need to see a couple of the museums and walk along "La Seine" for a bit, maybe down as far as Notre Dame.
One final note. After looking at the pictures, I thought you'd might want to know. Y-E-S, I've taken all of these pictures so far. The environment is so beautiful, it's hard to mess-up a photo!!
Bye for now, mon ami.
Posted by Dennis Steele at 5:52 AM No comments: 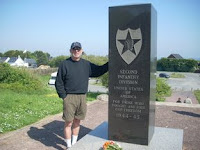 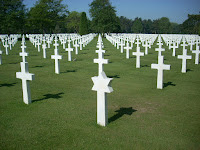 Roger and I drove into Bayeux last night and found a beautiful municipal camp ground. In the evening we had the good fortune to have our neighbors come over to visit with us. Their names were Jess and Victor. Both of these guys were 88 years old and, as the evening progressed, the discussion got around to the subject of World War II. As it turns out, Jess and Victure, not surprising, were war veterans with Jakes having served in Burma and Victor having served in Montecassino in Italy. They had some great stories to tell, and we thoroughly enjoyed ourselves into the eveni 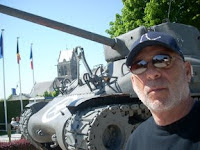 This morning, we awoke at 7 a.m. to join a WW2 beach and city tour. Overlord Guided Tours is run by a very interesting and informative young man by the name of Aleinn and his helper, Olivier. Early in the tour, we went to Omaha Beach along the beaches in north of France and bordering the English Channel. As the day progressed, drove along the beaches and worked our way south to Utah Beach. We stopped at a number of little villages as well and one of the most interesting was Sainte-Mere Eglise. You're probably familiar with this city from the movie The Longest Day. In the movie, Red Buttons plays a paratrooper who gets caught by a church spire after bailing out of a aircraft. This was Sainte-Mere Igles. His name was John Steele (no relation!!!).

Roger and I arrived in Paris and I am on my way to find a 1/2 day tour bus. I am lucky, in that Roger has decided to spend a couple extra days with me, and we'll be traveling into to south of France together. He'll be going home next Tuesday (today is Tuesday I think
Posted by Dennis Steele at 12:57 AM No comments: