One of our first challenges this morning was find a laundromat. Now, remembering this is New York, we were certain it would be an easy task. And, easy it was. A fully featured laundromat is just around the corner -- WITH a wash and fold service. So, for $7 "bucks", we having our clothes done. No hassle..

We met my friends Ilene and Jerry at 10:30 a.m. in front of the Inn. Portia and I originally met Ilene at a Shabbat dinner in NYC in early 1996. Ilene then introduced to her "boyfriend"  Jerry to us and we've been friends ever since. I knew they'd be early or on time. After-all, they were both born and raised in Manhattan. New Yorkers are always on-time!  Sure enough, we found them at 10:25 and spent the next few minutes saying hello. The last time I saw them was in 2009, it was a nice reunion. We decided to have brunch in the restaurant right next to the Inn. The food was "ok", but the company was terrific! We enjoyed getting to know each other again. Linda fit right in and she and Ilene talked non-stop with each-other during a most enjoyable meal. We said our good byes around noon and agreed to get together on 8/23 when we return to NYC for the last week of our stay in the East. Something to look forward to. 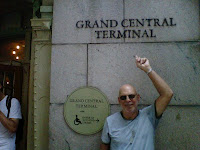 Linda and I decided to walk up-town and see  Grand Central Terminal.  On the way there, and just outside the station, Lexington Avenue was shut down for a "steet fair". Ten full blocks, from 45th to 55th avenue's were closed for the festivities. We walked every inch of it -- while enjoying some of the foods (I do realize I talk about "food" alot. But, hey, we do a lot-a walking!!).

After we walked the full length of the street-fair, we proceed over to Grand Central. It is a majestic building to be sure. Construction started in 1930 and the building was dedicated in 1931. Not only is Grand Central a beautiful, it is very VERY large.

Our original plan for the day was to go downtown to Canal Street, Little Italy, Chinatown as well as visit the famous "Katz's Deli" on Houston Street..  We also intended getting a "knish" at Schimmel's  (thanks Howard).  The hour was late,  so we decided to see those sights tomorrow. We did have the rest of the evening at our disposal  so we went to the theater -- movie that is!! And saw a film titled Soldier of Fortune with Christian Slater. Don't waste your $$ if you want to see a film.