Thursday June 19, 2008, Berlin, Germany. Today was the day to see the city. I was up early and went to the train station at around 9 a.m. to see the city Tourist Information Office. They were very helpful, gave me a great map of the city and and good map of the subway. Actually, Berlin has a dual transportation system, an underground (the U trains) and the surface tram system (the S trains). They cover the city very well, and one can buy a day pass to take care of all the cost. 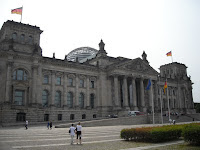 ough to give me a map with a "walking tour" of their route. So, for no additional cost at all, I walked the entire tour they suggested. It took in everything I wanted to see. It was a nice warm day, a bit humid, so walking was a great way to see the city and get some exercise.

Upon leaving the main train station, Hauptbahnhof, I walked to the German Reichstag building. It was a 10 minute walk. The building is famous, in that a "staged fire" by Hitler in the latest 1930's solidified his claim as German Chancellor. Sort of the beginning of the end. it is a beautiful building erected in 1894 and housed the first parliament of the German Empire. 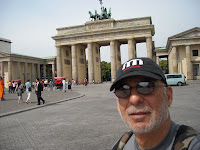 down the road was the Brandenburg Gate. Construction on the Gate was completed in 1798, and through the years, it has served as a powerful symbol in one way or the other. The Nazi's used the gate as their symbol. In 1963, President Kennedy spoke there, declaring that because the Berlin wall had been erected, we were "all Berliners". Again, in 1987, President Regan spoke at the gate as well, demanding that "Mr. Gorbachev, tear down this wall!". Today, it still stands in Berlin as a symbol, but now it is one of peace and conciliation. (an interesting note: there is a sizable "Starbucks" coffee shop on the square with the Gate -- a fitting testament to "commerce in the city").

Not far away I came upon the Holocaust Memorial. This 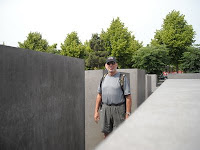 s a huge 4.7 acre site right in the middle of Berlin with granite blocks of various heights. They are aligned in perfect rows and are designed to commemorate the murdered Jews during World War II. The austere presence of the blocks demands that one consider their meaning. The memorial is built one block away from the Brandenburg Gate, another symbol of its design and meaning.

Not far away is the Memorial of the Topographie of Terror. This is an area of the city that h 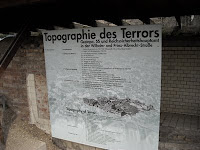 as been transformed into a museum under the skies. It is the location of the buildings and complex that made up the Nazi SS prison, a place of torture and execution. As I think about the subject matter of this blog over the last couple of days, I can see a recurring theme. It is hard to be in Eastern Europe or Berlin without recalling the history of the Nazi period, 1933-1945. It's a subject that is trust upon you and one that cannot be avoided. 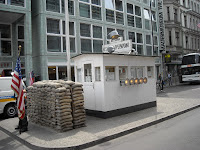 rlin and West Berlin during the Cold War, While other crossings into East Berlin existed as well, Checkpoint Charlie was the crossing for foreigners or Allied forces. Now, it is the center of commerce and tourist-related businesses. By the time I got to Checkpoint Charlie, I was ready for a break, so I sat down at a cute coffee "haus" and had a drink. People watching there was great fun.

I looked at the map while relaxing and noted that the Jewish Museum of Berlin was just a few blocks away. So, I made my way there, and inquired about guided tours. There were none, but for 2 Euros, I rented an "audio tour" and spent about 2 hours going through the exhibits. Essentially, the museum traces Jewish life throughout Berlin's history. I also noticed alot of young kids there, all with guides and obviously on school outings. I thought that was a good sign of continued progress in this most unusual city. 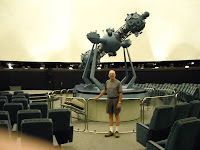 ow I've done this a thousand times, but I finally got onto an "S Bahn" -- the S train -- and took the cross city ride to the Zeiss Berlin Planetarium. It's an unusual building, and as I got closer to the front door, I noticed it was closed. I saw an employee entrance and decided to knock loudly. My persistence paid off and a gentleman came to the door. I explained I was from California and would like to see the planetarium projector. He invited me inside and took me to another office where I met one of the managers. I explained myself again, and was taken to the planetarium for a picture-taking session. It was great fun, and I'm glad I took the time to "knock on the door".

Tomorrow I am planning a day trip, possibly to Dresden or Pottsdam.....
Posted by Dennis Steele at 6:53 AM No comments: