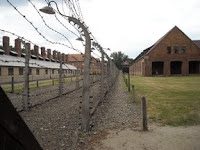 quick breakfast at the hostel at 8 o:clock. I walked over to the bus station and bought a round-trip ticket for Auschwitz. I boarded the bus at 9:10 a.m. and arrived at the camp at around 10:45. It took us around 1 1/2 hours to get there. I was surprised when I arrived. In the 68 years since the end of World War II, the area around the camp has been built into a thriving community. It was as though the camp was put there as a tourist attraction. pon entering the camp, now called the Auschwitz Museum, I found my way to the information desk and inquired about tours. There would be one starting at 11:30, so my timing was good. It was suggested I attend a short film first and report back to collect an earpiece and receiver so I could hear the tour guide. There were about 25 of us in this section of the tour. The admission to the museum was free, but the tour was 49 Zlotys, around $20. Our tour guide was knowledgeable about the evolution, history and use of Auschwitz. Her English skills were quite good. Our tour was of two of the three camps associated with Auschwitz. This was the main camp, Auschwitz I and Auschwitz II - Birkinau. We did not visit the third camp, Auschwitz III-Monowitz. The tour took around 3 hours.

As we toured Auschwitz I, it became clear to me that 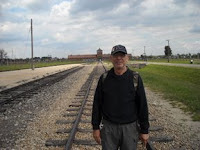 the reason for the camps' existence was to abuse, torture and then kill people. Auschwitz was the biggest of the Extermination (Death) Camps. It was estimated that 1.1 to 1.6 million were killed there -- 90% of whom were Jews. Others killed were gypsies, Catholic priests, Russians, political prisoners, homosexuals and the mentally retarded. Most victims were killed in gas chambers using Zyklon B gas; other deaths were caused by systematic starvation, forced labor, lack of disease control, individual executions, and so-called medical experiments.

I was particularly disturbed by a couple of sights I saw. One was the use of human hair for blankets, mattresses and cold weather clothing. It seemed a particularly morbid idea to use one of this items. We were told, also, that the ashes and bones from the crematoria was used a fertilizer in farming. I tried to understand what it must be like to eat food fertilized with human remains. While I realize that I was looking at these events with the eyes of a 21st Century adult, with the 20-20 vision of history as a context, it is still difficult to imagine such uses of the victims killed there.

The other thing that impressed me, and affected me, was "Block 11". Block 11 was known by he prisoners as "the death block." It filled several functions, but the most important was that of the central jail. At first it seemed "incongruous" to have a jail within Auschwitz, but then as I toured the facility, its uses 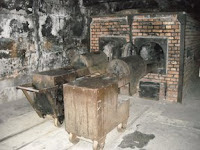 became clear. In the basement of the block, there were two different kinds of cells that were particularly cruel: 1) the starvaton cells. Here prisoners were put into the cells, closed in without light, and starved to death. It usually took 7 days to kill them. Those who survived were killed with an injection to the heart; and 2) the standing cells. Here, 4 prisoners were put into a cell 30"x30" and forced to stand throughout the night. They then worked as slave laborers the next day and forced to stand again. This process would last 3 days or more! Finally, the court yard area between Blocks 10 and 11 was called The Death Wall. Here prisoners, usually political prisoners from Poland, were shot against one of the walls. Around 7,000 people were killed this way.

Later, as I thought about these sights, I wondered about the construction of these facilities. Someone had to think of them in the first place. Someone else had to draw the architectural plans and someone had to supervise the slave laborers during construction. It started to sink in that Auschwitz had evolved into the sole purpose of killing people. But when we were taken to Auschwitz II-Birkinau, the purpose of the camp became even more obvious.

Auschwitz II-Birkinau is 3 kilometers from the main camp. The first thing one sees is the main gate. It is a large imposing building that seems to dominate the scene. But, once inside, one can see that Auschwitz I-Birkinau is absolutely huge. It is about 20

times the size of Auschwitz I and, at its peak, held 170,000 prisoners. But Birkenau was built to kill people. As train-loads of people arrived, mainly Jews from Nazi occupied Europe, "in" Auschwitz II-Birkenau, they were chosen to enter the slave labor force or be killed. Usually, a prisoner could go from the train to the crematoria in an hour or less. But, regardless of whether prisoners were chosen to die or work, the plan was the kill them all. The only difference was that some were killed immediately, while others were worked or tortured to death. Men, women and children, regardless of age, were treated this way. Any child under 14, except in some cases where medical experiments were conducted, were killed.

After visiting the gas chambers and crematoria deep inside the camp, I walked the entire length of the railroad track to the main gate. As I passed the area where the selections were made, I tried to imagine the events that happened here. I realized that, as the train came through the main gate and the people came off the cattle cars, the entire train was already in the camp. Many of the passengers were already dead from the several day journey without food or water. I was standing at a point on the Earth where millions had passed to their deaths. There were hundreds of visitors in the camp with me, and the contrast seemed surreal.

This makes the third camp I've visited: Dachau, Terezin/Thesenstadt and Auschwitz. While the first two were slave labor camps, many thousands died or were killed there as well. In a way, all of these camps were death camps. Oddly, I was most effected by Dachau, maybe because of our guide, maybe because it was the first camp I visited -- I'm not

sure. But one thing is certain, one can study about the Holocaust, listen to testimony or watch films and documentaries, but it isn't until one actually visits these places and witnesses the remains of what happened here, does he or she begin to grasp the realities of those times.

For those who deny the Holocaust, and the killing of 12 million people by the Nazi's before and during World War II, they need only take the time to visit here themselves. While one may not understand why these events happened here, one cannot deny that they happened. The evidence screams at us and reminds us all to remember the lessons of history.
Posted by Dennis Steele at 12:38 PM No comments: