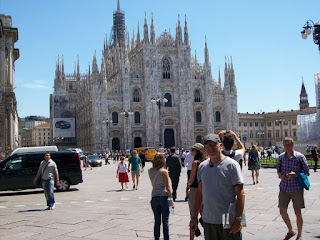 July 29, 2011 -- Milano Italy. We started out early in the day with breakfast at the hotel. It's the custom, in most of Europe, to include a "continental breakfast" during ones stay. A continental breakfast is different than we are used to in the U.S. It usually includes a wide selection of cheese, juices, fruit, lunch meats, toasts and coffee. It's a great way to start the day.

After breakfast we headed out on foot and tried getting reservations for our trip to Bologna on Sunday. The line at the train station ticket office was very long, so we headed into town vowing to wait out the line upon our return later in the day. As we wandered down the main street, Via Pisani, one can only notice that Milan is a mature, 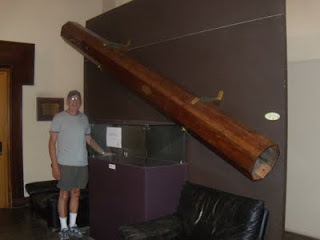 modern and vibrant city. Our route took us deeper into town through what appeared to be a mature business district with what appears to be a variety of banking and finance centers.
Our first stop was the Duomo. The Duomo is a Cathedral started in 1386 and completed in 1965!! It is an absolutely stunning building and is the fourth largest Cathedral in the world. While we didn't take the time to enter the building, one can tell it is exquisite in every detail. Taking a look at the picture at the top of this entry will make my point for me.
I noticed on the map there was a "Museo Astronomico Di Brera" a bit farther into the city, so we made our way in that direction. The museum is located in the Brera Academy founded by Maria Theresa in 1776. The astronomy exhibits are on the top floor and I found my way to the director's office. While he wasn't there, I did meet with an assistant director. He and I discussed the two observatory domes on the roof and the exhibits. It seems the telescopes were abandoned in 1917 because of the poor seeing conditions. I wasn't able to find out much more as my Italian nor his English was limited. We continued wandering throughout the e 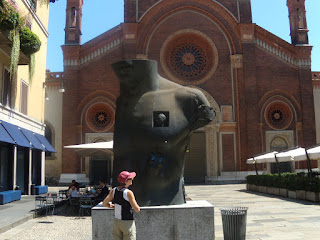 xhibits, found our way to the roof to take a couple of pictures and then left.
Our next stop was the Museum of Science and Technology. It included exhibits on robotics, ore mining and use and and the generation of electricity. The museum seemed aimed at a non-science crowd and I got the feeling it would be great for kids from grammar and middle school.
By now it was pretty late, so we headed back to the hotel. We tried to find a laundrymat, but without any luck. We both wanted to take one of the antique street-cars heading back toward the Central Train Station. It was fun, and it reminded me of my experiences on the "Key System", the streetcars that went into Hollywood from the Valley. I used to take them as a kid on my way to the Griffith Planetarium.
Tomorrow we're going to explore the city some more, take in a couple of the museums, locate the Milano Synagogue and planetarium. We'll probably take a double-decker bus tours around the city. I understand there's an English language cinema called the Odeon near the Duomo, so who knows, maybe we'll see a movie!!
News at 11!!!
Posted by Dennis Steele at 8:37 AM No comments: