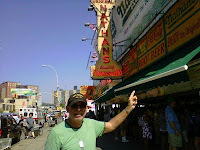 Well, it's 12:18 a.m. and we just got back to our lodgings.. It was a long and eventful day.  But one of the best we've had so far during our trip to the East Coast. Our plan was to visit Coney Island and Brighton Beach Avenue in Brooklyn. We found, as luck would have it, that we only needed to walk 3 or 4 blocks to catch the "D" train to Coney Island. No train changes were needed. So, we were off at about 9:30 or so. Of course, we had to find a Starbuck's for our obligatory morning coffee.

Once we boarded the train, it was an easy ride to Coney Island. I recalled, from my stay in New York during  the 60's, that Brighton Beach Avenue was an easy walk from the Coney Island train station. We started walking along the boardwalk, and just to be sure we asked a couple of people if we were right about our assumptions. Again, we were lucky. We met Ellie!! She's a 76 year old New Yorker, who was born and raised in Brooklyn. She not only told us where Brighton was, she walked with us along the way. It also turns out that she attended Lincoln High School at the same time my wife was there and new some of the same people. How ironic is that??!!

Brighton Beach Avenue is about 8 blocks long, filled with shops and restaurants from one end to the other. We enjoyed a potato knish, a bit of fruit from one of the many fruit stands along the way and met some interesting and delightful Brooklyn characters. By that time, it was around 2 p.m. One thing was on our minds -- and that was LUNCH at Nathan's Famous. Nathan's Famous is a "hot dog stand" founded by a Polish immigrant, Nathan Handwerker, in 1916. It's been a Brooklyn landmark for the last 95 years, and last year alone sold over 425 million hot dogs (that million with an "M"!!).

I pride myself in being a "non meat" eater, but ask many of my friends who'll tell you that -- every now and then -- I indulge myself. I enjoyed 2 hot dogs with onions and yellow mustard as well as an ear of yellow corn-on-the-cob. Linda enjoyed the yellow corn and cheese fries. All in all, a thoroughly enjoyable culinary experience. One highlight was a chance meeting with "Anthony". He knew of our Palm Desert home, having served in the Marines in Twenty-nine Palms for 18 months during the 90's. He's spent his entire life, except for the military, in Brooklyn -- in the same apartment he inherited from his parents and told us he'd be there "forever". We had a great time talking about the New York and Brooklyn of today and how things have changed.

After taking some pictures at the Wonder Wheel and the Cyclone, we decided it was time to head back into the city. By now it was around 4:30. We had tickets to Brooklyn Comedy Club show at 9 p.m. and decided to get cleaned up and leave a bit early for the show. We took the bus across town and transferred up to 53rd Street -- and, of course, had a snack before we settled in for the show at the theater. We sat in the front row and enjoyed the comedy and banter of 5 comedians. We also had a delightful time talking to our neighbors at the table before show show -- one couple from Maryland and the other from Kansas. 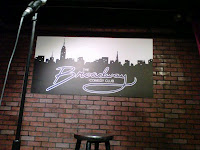 Linda and I left the show at around 10:30 and decided to walk from 53rd Street to 34th Street in the warm summer evening. As we went through Times Square we were delighted with the throngs of people and activity along the way. New York is truly a city that "never sleeps"!!

So, as the day comes to a close, it's time for some sleep. We've got another full day planned for tomorrow, so as always --  readers and friends -- stay tuned!!