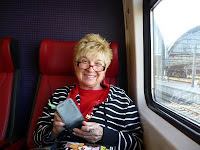 p to Brugge Belgium. Today we were up early in order to get an 8:59 train to Brugge. The train took us to Antwerp where we changed trains and arrived in Brugge Centraal at 12:25 p.m. (the train station in Antwerp was especially beautiful, particularly the old station).

Click HERE to see where Brugge is located. Brugge is the Dutch spelling. Sometimes, it can be spelled "Bruges"

Jennifer and I found the tourist office easily and we were armed with a map of the city and a good idea about what to do next. We decided to take the 15 minute walk into the center of town. The weather in Belgium was as elsewhere, sunny, cheerful and promised us a delightful day. 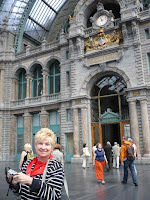 we walked into the city, we could see that Brugge is a beautiful place. The clean streets and charming buildings were all around us. The center of the city is dominated by a large cathedral, so it was easy to make our way there. As we got closer into the center of town, we saw horse-drawn carriages and a canal boat or two filled with tourists enjoying the view and commentary from their respective guides. After spending some time here, it is clear that the tourist industry is a major part of Brugge's economy. It seemed that most of the shops, hotels and other attractions are clearly serving the tourist trade. We found the "belfry" (clock tower) in the center of the Grote Markt. Á large outdoor market was set up all around and was surrounded by restaurants and shops of every kind. At one point, Jennifer and I found the "Rodeo Drive" of the city exhibiting every high-end name in fashion and hotels.

Brugge is called the "Venice of t 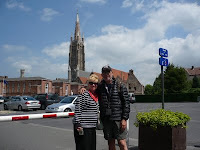 he North", with its canals and adjacent waters used for transportation and commerce. The city was chartered in 1178 and the historic city center is now a UNESCO World Heritage Site. After looking into a few shops, and sampling some delicious Belgian chocolate, Jennnifer and I decided we'd take a canal tour. The tour boats are easy to find, and we chose one we liked, making sure there would be an English speaking guide. He spoke good English, as well as French and Spanish. During the tour we learned that a Belgian beer brewery was nearby, so we decided to go there after the boat ride. 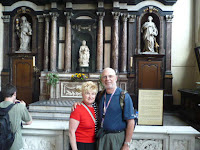 also wanted to see Michelangelo's "Madonna and Child" which is part of the art decoration in the "Church of Our Lady" and is believed to be the only the only Michelangelo sculpture to have left Italy during his lifetime. The church itself is a beautiful building with spires measuring 122 meters high. It is considered one of the tallest "brick" buildings in Europe. After viewing the sculpture, Jennifer and I sat in the serenity of the church for a short while.

As we left the church, we inquired about the brewery and 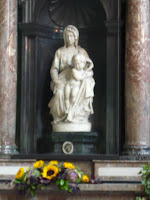 found it was a short 2 streets away. We walked there and found we were just in time for a 4 p.m. tour of the old brewery and beer tasting. This is the last active brewery in Brugge, the Huisbrouwerij de Halve Maan (Half Moon) and was founded in 1856. While the beer is now brewed in a new facility outside the city, the old brewery is a museum, used for tours and a delightful pub. Our guide had a great sense of humor, clearly enjoyed her city and wound us up and down over 200 stairs of the old building. At one point, we were on the roof with a beautiful view of Brugge and its many historic buildings. As promised, the end of the tour included a glass of their beer. 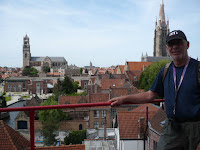 was getting a bit late, so Jennifer and I decided to make our way back to the train station for the 6:20 p.m. train back to Antwerp and then Amsterdam. We boarded the train on time, but due to a delay along the track, we missed our 7:59 connection and had to wait until 8:59 to board our train for Amsterdam. We got back into town at 11:30 p.m., just in time to make one of the last trams back to our hotel. We were tired and ready for a good nights sleep, but happy that we had enjoyed such a wonderful day exploring a part of Europe many people never see.