Today was our first full day in Washington D.C. We headed out about 8 a.m. and found a "Dunkin' Donuts" for coffee and a bit of breakfast.Their coffee is really good -- although Linda opted for a Mocha Latte at Starbucks. We walked over to the National Mall and got their around 9:15 or or. The museums don't open until 10 a.m., but the Smithsonian "Castle" opens at 8:30, so we found our way there for some information, a bit of rest and a look see at some of their exhibits. 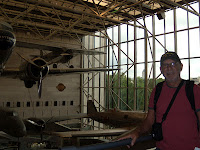 At around 9:50, we made our way to the National Air and Space Museum. we spent about 4 hours looking at the exhibits on both floors. The museum has changed a bit since my last visit in the 90's, but it is still the place to go! The aircraft is first class and the exhibits and descriptions impart a wealth of information about aviation. As one enters the museum, the "Milestones of Flight" exhibits are overhead. One thing missing, so I thought, was the Wright Flyer - the first controlled flight of an aircraft. It turns out the Wright Brothers have their own exhibit now, so it was still there -- just not in the expected place.

At noon, Linda and I went into the Einstein Planetarium for a presentation called Journey to the Stars. It was nicely done with great photos and discussions about origins of galaxies, stars and planets. The planetarium has a beautiful Zeiss projector recessed into the floor and out of the sight of the audience. Yet, the presentation was outstanding. We finished out stay at the Air and Space Museum with a quick look around the rest of the exhibits. One needs to realize that it takes "days" to do a proper job looking into all the exhibits at NASM. We were there for 4 hours, so much was left unseen!! A good reason for another visit at another time.

We took a long walk along the National Mall toward the American History Museum and got there around 2:30 or so. It had been a number of years since my last visit, so I was expecting to see much of what I experienced in the 90's. But, museums change and exhibits change too. We were looking forward to seeing the "automat", for example, but found that it had been 8 years since it was removed!! Time does seem to fly. Many of the exhibits have been changed from actual artifacts to photographic displays and discussions. I was rather disappointed in the move away from using actual artifacts as exhibits. There were some, and those were still of excellent quality and content.

I was disappointed to find that the "ham radio station" was no longer a the museum. The "working post office" was gone, the 1890's "soda fountain" was gone too. The general look and feel of the museum was cold and uninviting. I'm hoping that, in the future, exhibits will improve and change for the better.

By now it was getting rather late. We decided to hold off the Holocaust Museum until tomorrow. We've also contacted our Congressional Representative and was invited to stop by for a VIP tour of the capital building. We have a 2 p.m. appointment with them for tomorrow -- more walking!!!!

On the way back to the Inn, we decided to take a look at Union Station. It's about a 15 minute walk from our lodgings. We enjoyed the activity and ambiance.  About an hour later, after a nice scoop of Hagen Daas ice cream, and we made our way back to the Inn for a well deserved rest.

So, as always dear reader -- stay tuned, more to follow....
Posted by Dennis Steele at 7:11 PM No comments:

Linda and I got to the Palm Springs Airport around 6 a.m. (our good buddy Jim gave us a ride) and boarded an American Airlines flight at 7. After departing, we flew into Dallas and then on to Reagan National. It was an easy ride. Unlike my usual pattern, I actually slept for a little while, so the flight went quickly.

Once in Washington D.C. we made our way to the Metro and took the subway to the Gallery Place (Chinatown) Metro station. A short 3 block walk and we were at the Capital View Inn on I and 3rd St. We're also a short walk to the National Mall and the museums we want to see.

Around 7 p.m. we went into Chinatown and had dinner at a local joint. The food was just "ok", but edible!! We agreed not to go back there again!! Oh well, one must strike out sometimes.

Tomorrow we'll be heading over to the National Air and Space Museum and American History. If we have time, we'll also go over to the Holocaust Museum. We've made arrangements with our U.S. Representative -- Mary Bono Mack -- for a Capital and Pentagon tour on Wednesday. That should prove interesting. Unfortunately, we won't be able to get a White House tour as we didn't give them enough notice. They tell me one needs 3 or 4 months for those tours.

More to follow..
Posted by Dennis Steele at 6:21 PM No comments:

The day after tomorrow, on July 30, Linda and I will set out for a month on the East Coast. We'll be going into Washington D.C. for a couple of days to see a variety of the Smithsonian museum's and other sites. We've arranged for a congressional tour of the capital building and Supreme Court. 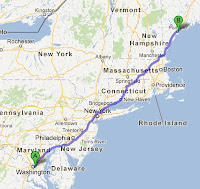 From Washington we'll go by train to New York City for a 5 day stay. Linda will visit her cousins who are in the 90's. New York lends itself to a wide variety of activities -- Broadway plays, Canal Street, the Lower Eastside, Ellis Island -- you name it, New York City has it. During our stay we'll visit Newington CT. and the American Radio Relay League's Headquarters for a nice visit.

On August 8th, we go to Grand Central and transit by train to Boston. Ah, the Freedom Trail and Fenway Park call us for a couple of days. Boston is a great town, lots of sights, activities and GOOD FOOD!! A few days later we're on our way to Portland Maine for a visit to our good buddy Dave Blumin and his wife in Boothbay Harbor. My niece Deb and sister-in-law Winnie live in Brunswick Maine, so we'll check out those guys during our time in Maine.

Another highlight of our trip will be a stay in Springfield Vermont, the site of Stellafane. Stellafane  is sponsored by the Springfield Telescope Makers founded in 1923 by Russell W. Porter. Among his other credits, Porter was the designer of the 100" and 200" telescopes located on Mt. Wilson and Palomar Mountain. Springfield is considered by many as the "birthplace of amateur telescope making".

We'll be returning on August 30, but in the meantime -- keep an eye here. I'll be posting photos and comments about this adventure during our trip.
Posted by Dennis Steele at 11:03 AM No comments: