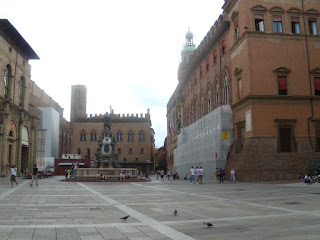 July 31, 2011 -- Bologna, Italy. We boarded an "EC" (Euro-City) train at 11:15 a.m. and arrived in Bologna at 12:20 p.m., about 20 minutes early. During the trip, I found there was an internet connection on the train, so I logged into their wifi system. It cost me .01 Euro -- one cent Euro, about 1.5 cents U.S. It was a neat experience being able to read email and check out my Facebook account while traveling from Milano to Bologna. My posting on Facebook was "why can't I do this in the U.S.?". It seemed to me that, as the largest, most advanced nation on the planet, something as simple as a high-speed train between cities, with internet, would be the easy.

Our first impressions of Bologna were that it is a small town with nothing to do. We were wrong. As we walked to our hotel, about 300 meters from the "Stazione Centrale", most of the shops were closed, there was very little traffic in the streets and hardly any people were present. We realized it was Sunday, so maybe th 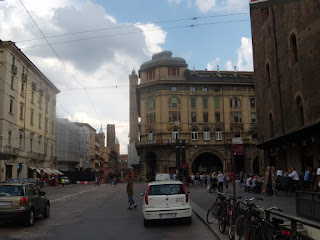 at was the reason. Once we got situated in our lodgings, we headed out for the Piazza Maggiore (the main square) in the center of the city. It didn't take long for things to change.
Along the main street, Via dell Indipendenza, activity became more evident. Before too long we found shops open, a good number of people walking along the street and the bustle of cars and buses. By now it was around 2:30 p.m., so we decided to try the restaurant recommended by the front desk clerk at the hotel. the Osteria Dell Orsa Sas via Mentana. The desk clerk recommended that we order "pasta".
Trying to locate the restaurant was a bit confusing, so we asked questions from an older gentleman with a hand-truck full of "stuff" and a little dog. It turns out his "stuff" was for his performance as a street musician. He was a saxophone player. Once he gave us easy-to-follow directions he then proceed to give he details instructions about "something". Even though he spoke beautiful Italian, we only understood a word or two. We shook our heads yes and thanked him for his help. I think he was telling about the museums in the city, but I'm not sure. 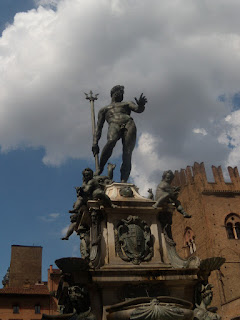 Once we found the restaurant, we ordered a liter of beer and some food. Linda had eggplant parmigiana while I had pasta Bolognase.Our waiter was an interesting young man with with long hair in dred-locks, a t-shirt and shorts. I noticed he spoke Italian, English and French while were there. Before we received our food, he reminded us that "only HERE can you get Bolognase!! Nowhere else in the world. He gave me a knife, but reminded me that "I must NOT cut the pasta!" We followed his directions exactly. Needless to say, the food was delicious. All through our trip we haven't been able to find decent "Italian food" -- until now.

Finally, later in the evening we located the tourist information center near the main square. We found that a Jewish Museum is in the city so walked over to see where it was located. We'll be going there tomorrow. There are a variety of other sights we'll seek out in the morning, but it's apparent to us that Bologna seems to be a "one day' city!! There is lots of activity to observe and see, but not all that much to do. A number of museums awaits and, maybe, a tour bus is in our future.

I'll keep you up to date in tomorrow's blog post.
Posted by Dennis Steele at 5:58 AM No comments: