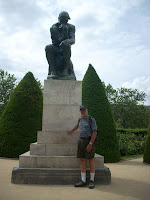 Well, today is Thursday May 15, and I've a very eventful day. I was lucky and slept a bit later than usual, but by 10 a.m. I was on the bus for the center of Paris. I took advantage of the two-day tour-bus pass and boarded the bus determined to finish the city tour. The weather was cloudy and a bit wet. Last night it rained throughout the evening, so I hoped that by the morning it was, at least, stop raining. My hopes were granted by the “Paris genie”. Although it was cloudy, it was warm and by 2 or 2:30 the sun tried to make an appearance.

I walked around the Louvre a bit, but did not go inside. The building is huge and the crowds were even bigger. After a bit of picture taking, I boarded the tour-bus again and staye d on the bus until the Cathedral at Notre Dame and realized I was within walking distance of the Memorial de Shoah. So, with map in hand, I set off looking for the museum. One thing about the streets in Paris – they are named many MANY different names. Not only that, but it seems to me that the streets change names every block or so. As I've said, Paris is a huge city, with lots of little streets and turns. The maps are very crowded and complicated. But, indeed, I found the Shoah Memorial and spent an hour or so there.

I was then determined to figure out the Metro system. Paris has an extensive subway system, and while it isn't as well labeled as London, I was lucky 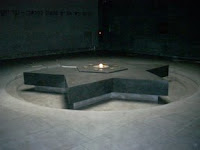 and got to the Rodin Museum. Rodin's sculptures are amazing. I especially liked “The Thinker” and had my picture taken by the sculpture. It is fairly large and sits atop a marble pedestal. His other pieces, especially the nudes, are absolutely beautiful.

I again tackled the Metro system and found the “Musee de Discouverie” (science museum). I was especially interested in seeing the planetarium and hoped I could meet someone there who was familiar with the Paris amateur astronomy scene. I got there just as a planetarium show was finishing and managed to meet the lecturer. He tried to introduce me to one of his colleagues who is into telescopes, but was un 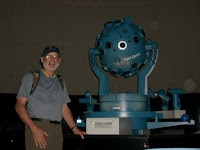 able to do so. I did get a picture taken with the Zeiss planetarium projector.

I've finally found my way back to the cafe on the Champs Ellesse where they have free wifi where I'm having a nice snack and drink of a local French beer. Roger and I are off to the south of France tomorrow, around Dijon, where he knows an Inn owner who may have some room for us. Otherwise, we'll use his van for a couple of days while we explore the local spots of interest. Roger heads back home on Monday and I'll be catching a train for Pisa and then on to Rome.

Posted by Dennis Steele at 8:36 AM No comments: