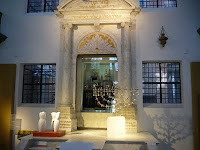 continental breakfast at the hotel, we made our way over to the market area. I needed to have some laundry done, and there was a vendor there who would do the work for me. For a couple of extra Euros, my clothes were washed, dried and folded. We walked along the street-market for a bit, bought a gift or two and then decided to make our way to the Jewish Museum in downtown Amsterdam.

It was a beautiful day, so w 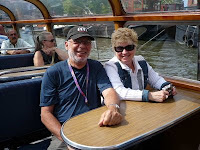 e decided to walk. I was surprised to find that, when walking straight along the street and not following the tram tracks, it only took us around 20 minutes to get to the museum. We paid our entry fee and each of us got an audio tour. The museum was originally a synagogue dating back to 1671. After the Second World War, the synagogue lay unattended and in disrepair, but in 1989 the building was renovated and the museum opened its doors. Although it is not the first Jewish museum that has been in Amsterdam, it is now the only one in the city. The collection is about Jewish life in Amsterdam from the late 17th century to present. Jennifer and I spent around 2 1/2 hours going through the collection thoroughly.
As we left the museum, we noticed the Amstel Diamond building 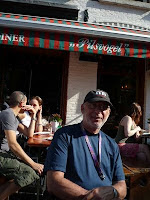 across the canal. Jennifer recalled that there were tours given, so we took our chances and went to the front door. We gained entrance and, yes indeed, we were given an introduction to the cutting, polishing and setting of diamonds. We stayed around 45 minutes. On the way back into the center of town, we stopped at a coffee shop on Rembrandtplein for some coffee and conversation.

t it would be a good idea to get the train ticket for the journey to the airport tomorrow morning. We both need to be there early. I went ahead to the train station while Jennifer checked out one of the many beautiful stores along the canal. We met 45 minutes later and decided we'd take a tour of Amsterdam by canal. So, we found a canal boat to our liking and spent the next hour going around the city from that perspective. It was a warm and delightful day, and being on the water was just the perfect end a day of sightseeing.
By 6 p.m. we were back at the laundry, I picked up my clothes and we decided to go to our favorite tapas restaurant for dinner and drinks. The restaurant is called Pilsvogel, and we liked it so much that we've gone back 3 times now. This was our last evening in Amsterdam and we wanted to enjoy a good meal, talk about our experiences together and pursue one of our favorite passtimes -- people watching!!
So, tomorrow it's to the airport and back to reality. What a wonderful 9 days in Amsterdam. What an absolute wonderful 2 months in Europe. It's hard to believe it is coming to an end, but while these kind of trips always do -- there's always next year.

Sunday June 29, 2008 Amsterdam Holland. Today was a most unusual day, as Jennifer and got up at 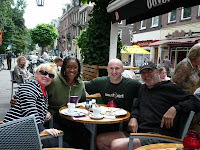 around 1 p.m.!! After running around Amsterdam for the week and going off to Brugge then Brussels and Antwerp, we must've needed the sleep. As we were leaving the hotel, we rented 2 bicycles and set out to explore a bit. At first, we stayed in the immediate vicinity of the hotel to get used to riding a two-wheeler again! We zigged and zagged, but finally got our bearings. 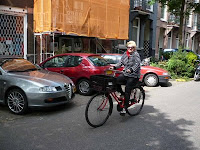 set off to find some breakfast and rode over to the marketplace, and weren't surprised to find the market closed as it was Sunday. But there was a restaurant or two open and we chose one we had seen over the past few days. We sat down outside and had some coffee to get started. As we enjoyed the morning, I struck up a conversation with a couple of young folks at the next table, and after a couple of minutes asked them if they'd like to join us. They did.

Daniel and Martine are delightful young folks from London. They had flown to Amsterdam for a weekend holiday and stopped at the restaurant for breakfast. We spent the next 3 hours laughing, exchanging stories, exploring ideas about travel, politics and the European Union. The food was good too. Toward the end of our visit together, we exchanged the promise to email each other, and I gave Daniel my blog and website information. Jennifer and I both hope they'll be in touch, and we feel we made some friends during our time here.

We jumped back on the bikes again and headed out of the city. 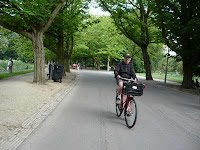 At first we stayed on quiet streets and it didn't take long for us to get into more residential areas of the city. The homes were large and beautiful and we were sure we found the "high rent" district of Amsterdam. We continued along one of the canals for a good time and kept going away from the hotel for around 45 minutes or so. We decided to turn around and head back. Between Jennifer and I we were able to return directly to the hotel area without any problems. 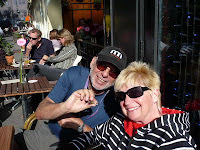 re riding back to the hotel, it was around 6 p.m., we thought it'd be fun to check out the cinema and see "In Bruges" with Colin Ferrell and Ralph Finnes. We figured that, because we had been there, In Bruges would be a great film to see together. We locked the bicicyles near the tram and took the short ride into town. We bought tickets for the 19:15 (7:15 p.m.) showing and decided to find a coffee shop while waiting for the film to start. It wasn't a far walk to a nice shop on Rembrandtplein before Jennifer and I were enjoying a nice cup of coffee and enjoyed and some of Amsterdam's finest . . .

Back at the hotel we checked in the bicycles and then made our way back to our favorite "tapas" restaurant. It was the final game of the Euro2008 Cup with Germany and Spain as the finalists, so we sat outside to watch the game. There was about 20 minutes to go. A couple of beers and a dish of olives capped off a most enjoyable day. We both realized that tomorrow, June 30, is our last day in Amsterdam. The time has gone too quickly, but we agreed we've had a wonderful visit to this most wonderful city.

Posted by Dennis Steele at 12:20 AM No comments: