Today I was off to Bath Spa, around 1 1/2 hours from Stroud by train. Bath 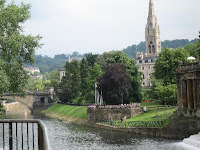 is the home of 18th Century astronomer and telescope maker William Herschel. When I first arrived I found that I had around 3 1/2 hours until his home/museum opened, so I took a tour on a double-decker bus. For £10 I was able to get a 1 hour city tour and a 45 minute country tour. Bath is a very beautiful city that is, among other things, home to Bath University. The univesity is above the city in some beautiful mountains with breathtaking views below. The American Museum is at the university as well.

The city includes a Jane Austin Center. Austin is the citie's most famous resident. I would like to think that William Herschel was a famous resident also. Among other things, he built the worlds larges 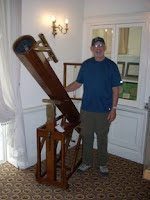 ope of the time, a 48" reflector with a 40-foot focal length. He discovered the planet Uranus and catalogued many double-star systems and was the first to realize that double-stars were, many times, a binary system. That is, two stars rotating around eachother.

The pictures here are of: 1) Me and the 7" reflecting telescope built by Herschel. This replica is on display in the Herschel Museum in Bath, 2) The City of Bath seen from the hills nearby, 3) The Putney Bridge. One side of the bridge has a row of shops along a narrow sidewalk. The shops are 10-feet wide and just a few feet deep, an

d 4) The Putney Bridge along with one of the churches near downtown Bath. Bath is a very beautiful city.

Tomorrow, Roger and I will leave for the North of France. We will visit Stonehenge along the way. That should be very interesting. We will board a ferry at 10:30 p.m. and arrive in France at about 7 a.m. in the morning. We'll spend a couple of days driving south along the battlefields of World War II and visit some of the cities as we go. I'll describe these in more detail later.