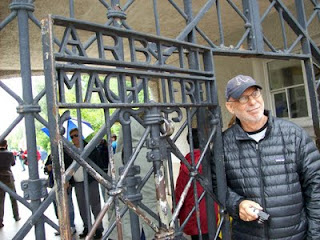 July 24, 2011. Dachau Germany. We started out the day at 7:30 a.m. and wanted to make the 8:30 a.m. train to Munich. Our plan was to visit the Concentration Camp museum at Dachau. It turns out our train was a "milk train", and what would have been a 2 hour rip to Munich took us just over 3 hours. We saw "every stop" along the way. All was not lost, of course, as we met an interesting couple from Hamburg who had just finished a 2-week vacation in one of the small Bavarian villages along the way. "Hans" is a simi-conductor engineer for Philips in Hamburg, and we had an interesting discussion about technology in general and semi-conductors in particular.

We arrived in Munich around 11:30 a.m. and made our way to the "underground". There is an extensive subway system in Munich and Dachau is one of the many stops along the S2 line. Once in the city of Dachau, we boarded a bus for the museum and arrived about 20 minutes later. As we walked toward the front gate of the "camp" we joined a tour group that was just beginning to take shape along the way. The tour guide spoke excellent English, so we felt we were pretty lucky. 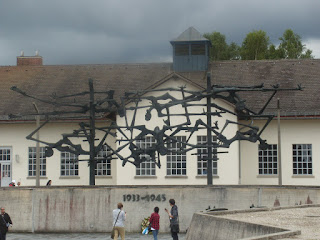 The tour lasted around 3 hours and we covered the entire camp -- from the administration of the prisoners to the crematoria. I had been to Dachau in 2008, but again, I learned quite a bit more about the extensive concentration camp system the Nazi's created in the 12 years of their rule in Germany. Over its existance as a Concentration Camp, more than 200,000 people were held there with 46,000 killed through a systematic program of "slave labor". Our guide explained how the Nazi´s assigned prisoners tasks they could not possibly perform then punished them for the "infraction". Most of the deaths were a result of starvation, however. Additionally, in support of the war effort, prisoners were "sold" as slave labor to such companies as BMW, Krupp and Messerschmidt. It was a stark reminder of the kind of inhumanity people are capable of perpetrating on their fellow human beings.
We caught the subway back to the Munich station and boarded a high-speed train bound for Innsbruck. This time, the trip only took 2 hours. As always, we were luck to meet a couple of law students going to a summer school at the University of Innsbruck. We discussed a wide variety of interesting topics and in the end, we were invited to a discussion group and lecture on "International Human Rights" at the university tomorrow. It seemed a fitting invite after our day of learning about the human rights violations practiced at Dachau in the 1930´s and 40´s. 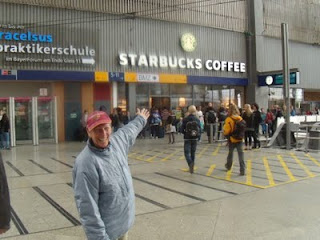 On a more positive note, as we wandered toward the train for Innsbruck, we spotted a "Starbucks Coffee" -- The FIRST Starbucks we've spotted since we've been in Europe. And the FIRST real cupa coffee we've had since we got here!!! Ah the American Experience!
After a late dinner, it's time to close, so as always my friends, more to follow.....
Posted by Dennis Steele at 1:57 PM No comments: