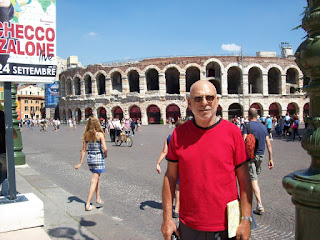 July 22, 2011. Venice and Verona Italy. This was an interesting day. Our train for Verona was at 12:57 p.m., so we had some time in the morning to explore. We saw that the Gam Gam Restaurant, in the Jewish section of town, serves potato latkes so we headed out there for a breakfast. Once there, we found they wouldn't open for another 30 minutes, so we headed into the heart of the Ghetto. There we found an artist by the name of Rado Leon. His work is in pencil is quite beautiful. We discussed his drawing and the conversation got around to the use of the word "ghetto", particularly as it is used in the European Jewish community. He explained how it was an important "reminder" about the Jewish experience and to remember where the Jews "were" and where they are now. The discussion impressed me, such, that I walked over to the Chabad House and donned Tfillin with Eliezer acting as my tutor. I found it an emotional and uplifting experience!

We then made our way to the train station and boarded the Eurostar for Verano. It was about an hour ride in a modern, air-conditioned and comfortable train. Once there, our plan was to get our ticket for Innsbruck. B-U-T, it turns out that the railway ticket-agents had called a one-day strike, and getting a ticket was impossible. It also seems that the train for Austria is run by a different company, so we just need to show up, find the train, get on and see what happens! Wish us luck for our transit to Innsbruck tomorrow!!

We walked into the heart of V 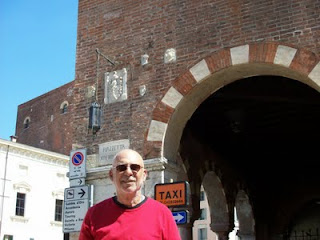 erona. It is a beautiful city, the main street of which would rival Rodeo Drive, Wealth Avenue or El Paseo. All of the high-end and expensive shops were there. We walked through the city a bit,
and located the Piazzette de 14 Novembre (my birthday). It was neat seeing the plaza with my birthday on it (see the picture on the left).

A bit deeper into the city we found the Juliette House and took pictures near the statue and her balcony. You probably know that this is the "Juliette" of Shakespeare's tragedy Romeo and Juliette.

Verona also has a coliseum similar to the one in Rome built in 30 C.E. and can host 30,000 spectators. Today, four productions are performed each year, including opera, ballet as well as popular musicians and performers. Lyle Lovette, for example, will be there soon. I'm told that the Verona Arena is one of the best preserved venues of ancient Rome. It was beautiful and is right in the middle of town. 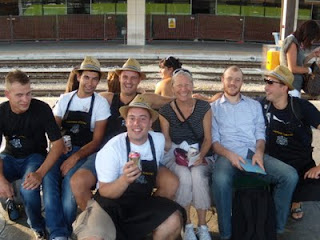 Back at the Verona train station, we located our track and decided to head up there to wait for our train. There were a bunch of young guys drinking beer, singing loudly and have a great time. I said, "hey where's my beer" -- and before I knew it I had my beer and Linda and I were in middle of it all. It was really lots of fun. While only one guy spoke very broken English, we all understood that we all enjoyed each other's company. The fun continued until it was time to board the train, and we said our farewells.

We found our way back to Venice on the 7 p.m. train and had an interesting exchange with a street vendor. As I walked away from the train station, the street vendor "grabbed" my arm and roughly guided me to a model ship he wanted to sell me. I declined and went my way. The interesting part happened with we heard a siren and a police boat roared to a stop nearby. Two policemen walked up the very same guy who had grabbed me! They didn't seem pleased with him and some heated discussion took place. We left the area after about 5 minutes, but the policemen were continued talking with the guy. Hummmm, it seems I missed being in the thick of that by about 60 seconds or so!!

Tomorrow we'll be making our way to Innsbruck, so stay tuned....
Posted by Dennis Steele at 11:50 AM No comments: