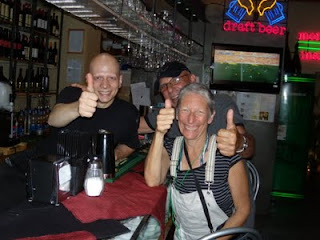 Tuesday, July 12, 2011. Since this was our last day in Rome, we decided to take a tour bus around the city. We thought we'd see all of it without having to walk too much. So, we decided to take one of those double-decker tour buses around the city. This was the way to go. We stopped at the Trevi Fountain again, this time to get a better picture of ourselves and had the fortune to meet a nice couple of folks from the U.K. on holiday for a few days.
As we were leaving, we stopped at a neat little cafe called the News Cafe and struck up a conversation with the "bar tend". He was most enjoyable, and we exchanged pleasantries. His name is Chris. Chris and I decided we'd become "friends" on Facebook, so
I gave him my Facebook user name. Since it continues to pretty warm in Rome, Linda and I enjoyed a couple of beers while Chris put out a nice serving of patatoe chips as a snack.
We boarded the tour bus again and made our way back to the Termini and hotel area. After checking in with Francesco via email, we found we needed to leave the city in the morning and head into Tuscany. Francisco said that "Tuesday would be better for him". Linda and I had decided we need to sample "pasta" while in Rome, so we found our friend Riccardo and asked about a good restaurant. Luck would have it that his commendation was just around the corner just a couple of blocks away, so off we went. By now it was around 7:30 p.m. or so. Riccardo told us to ask for "Mario"...
We found "Fraginetto Restuarant" in short order and introduced ourselve 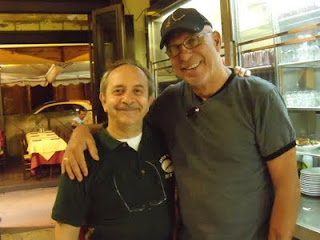 s to Mario the owner. After explaining we wanted authentic Italian food, Mario said "I'lla take care of you" and brought Linda and bowl of lasagna and me some linguine con mare (linguine with fish). The food was great and we enjoyed a nice bowl of fruit to end the meal.
So, tomorrow we'll be on our way to Follonica, stay tuned..
Posted by Dennis Steele at 1:23 AM No comments: