Today we had planned to go "uptown" and visit the Columbia Campus. Linda had been there in the 60's, so it was a trip into the "old times". Things had changed for her and it was barely recognizable -- but she did see one or two landmarks from the "good old days". We wandered the campus for about an hour and then headed downtown -- on foot!! Columbia is at 116th Street on the west side. I hadn't been in that part of the city before, so it was fun to see something new. It's a beautiful area -- lots of nice buildings and shopping. But, of course, not as crowded as Times Square or the rest of downtown.

At one point, we hopped a subway train and took it down into Times Square again. We wanted to try a piece of the "famous" Lindy's cheesecake. We found our way there and enjoyed the air conditioning of the dining room. The cheesecake was served -- and it was "ok". Nothing special, we thought, but then again -- what do we know from good cheesecake or GREAT cheesecake!! It was fun anyway.

We found the "wax museum" with a really good figure-likeness of Morgan Freeman in the front of the museum. I took a photo with him. You must admit, the figure looks just like the real guy -- doesn't he??

After all the walking we had done the last two days, we decided to hunt down a movie  both of us could see for the first time. We went to an AMC theater on 42nd Street and saw "Step Up Revolution"!! Here again, don't waste your time or money on this film. The dancing was good, the story was lame.

We walked down 6th Avenue toward the Inn and stopped in at the Empire State Building. We thought we'd visit the "observatory". There was a 2 1/2 hour wait in line, so we decided to blow off that until we return later in the month. 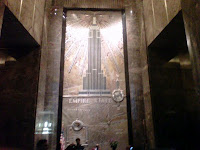 Tomorrow we have an 8:20 a.m. train for Boston, so we'll be up early and out of here by 6:30. The plan is take a bus or cab to Penn Station so we can find our track and settle in until departure time.

Time for some well deserved rest!!