June 4, 2008, Prague, Czech Republic. Today I decided to go to the city of Terezin, about an hour away by bus. Terezin is a fortress city, builty at the end of the 18th century b

y the Emperor Joseph II to protect Bohemia from the northwest.. Terezin was completed in the 1890's, but was never used as a military base. Rather it was used as a prisoner of war camp during World War I, and ultimately became a prison for some soldiers and poltical prisoners.

In the 1940's, the Nazi's determined that Terezin would be a relocation center for the Jews who fell under their domination. The Jews were promised relocation to a new place to live in peace and security. In reality, for many of the Jews who were relocated there, it was a way-station to the extermination camps to the east. During WWII, the Gestapo used Terezín, better known by the German name Theresienstadt, as a ghetto,concentrating Jews from Czechoslovakia, as well as many from Germany, Austria, the Netherlands and Denmark. Terezin was not used as an extermination camp, but of the over 150,000 Jews who arrived there, about 33,000 died in the ghetto itself, mostly because of the extreme population density. About 88,000 inhabitants were deported to Auschwitz and other extermination camps At the end of the war there were 17,247 survivors.
I boarded the bus at 10 a.m. and arrived in Terezin at 10:55. A bit of a change came in t 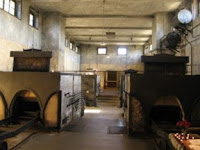 he weather, with rain threatening a good part of the morning. It drizzled a bit and rained only a little during my stay there. I found a tourist information center in the city, got a map and some directions, and set out to look around the city and visit the museums. I visited the Jewish museum just around the corner from the bus stop. Since Terezin had a "semblence" of society, the Jews who populated the city tried to build a sense normalcy. The arts florished and as a testament to life there, the museum was full of artworks by the children and adults alike.
I wandered the city and noticed it isn't a very busy place. There are a small number of businesses, some kids came and went from school and there were a few cars. But it didn't seem to be very populated. The library was closed, so maybe there was something going on -- a holiday perhaps. I don't know. One of the things I wanted to see was the crematorium. Just to the right of the crematorium building is a graveyard along with a black marble monument to their deaths. There is a second graveyard at the entrance to the Small Fortress also. There are Christian and Soviet memorials at the site as well. Except for another 2 people just leaving as I arrived, I was the only visitor. It doesn't seem that this part of Terezin gets many visitors.
I decided that no visit w

ould be complete without visting the Small Fortress -- the prison. It's about a 15 minute walk from the town, and as I looked back toward the main part of the city, I could clearly see the "fortress" aspect of Terezin. It is surrounded by walls and gates that can be used to control traffic if needed. Ofcourse, today, it is much more open, but I could see how the entire complex was indeed a fortress. I

could see the Small Fortress in the distance, and as I got closer, the graveyard became a dominent feature. The front entrace is forboding, with black and white painted stones at the entrance that outline a sense of hughness and mass. The gates seems to say "you will not leave here -- unless I let you leave!".
Oddly, and as opposed to the feelings I had at Dachau, I didn't feel a sense of "misery" here. Yet, clearly, the people who were imprisoned here were starved to death, punished for minor violations or executed in the public square. Maybe it was because I walked on my own and didn't have a guide telling me what happened along the way. It didn't seem as though the museums added to the realities of life in Terezin. Only that Jews had been imprisoned here, had lived here,

had died here and very few survived.
As I returned to Prague by bus, it was raining fairly hard. I was glad I carried my umbrella. The rain cooled the humidity and temperature a bit. It seemed a fitting end to the experiences I had in Terezin/Theresienstadt.
Posted by Dennis Steele at 8:23 AM No comments: