August 24, 2014 -- Today we decided to "get outa town". After a quick breakfast and a cupa coffee, we headed off in the direction of the Euston Railway Station in Central London. We used the underground and were in the station in about 15 minutes. I must say, the London underground (its subway) is one of the best. The trains are modern, comfortable, affordable, fast and keep to the schedule. The London Underground has 270 stations with 250 miles of track. Add to that the DLR (their light rail) system, and it's an amazing transportation system.

We had decided to venture to "Bletchley Park" in Bletchley U.K. Normally it's 1 1/2-hours by train from Central London. Today, however, the rail system decided it would maintain the tracks, so we could only get as far as Watford -- about 1/2 way. From there we boarded a bus for the rest of the journey. So, instead of a 1 1/2-hour journey, it was a 3-hour journey! The bus was a "local" that stopped at EVERY little town along the way. Even though we left our lodgings at 8:30 this morning, we didn't arrive in Bletchley until 1:15 p.m.! It was a LONG ride.

Undaunted, we left the station and walked to Bletchley Park, about 10 minutes away. Bletchley Park was the central site of the U.K.'s "Code and Cypher" school during the Second World War.  Even though the British Government had been active in  "deciphering" activities for a number of years, it was in 1939 that it became active listening in on Germany. After England's entry in the war, its goal was to break the "Enigma" code. Even though it shouldn't have been possible -- the British were able to "break the code" and, through its efforts, affected the final outcome of the war.

During our visit we toured a number of the "huts" used in the cypher effort and were helped by a "free audio guide" loaned to us by the Park. A dominant building is the "Mansion" which was the command center of the effort. All of the buildings, including the Mansion, are very well preserved. During our exploration of the Mansion and "the huts" we saw much of the original furniture and equipment used by the nearly 12,000 people employed during the effort. Old typewriters, teletype machines, radio receivers and other equipment were in evidence throughout the "museum". 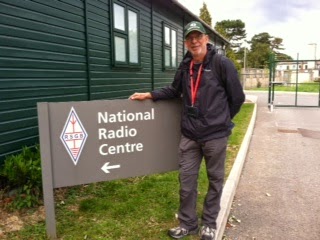 I also noticed a "ham radio antenna" on the roof of one of the buildings. We found it was a "working ham radio station" licensed as GB3RS. We met "Anthony" who was using the ham radio station and acting as a docent for the many visitors who passed through. It was fun to talk with Anthony, send some morse code and talk about ham radio -- past and present. It is interesting to note that much of the decoding efforts were through the use of Morse Code. Thousands of professional and volunteer radio operators copied code on German frequencies and passed them on to Bletchley Park for deciphering.

We spent about 3 hours exploring Bletchley Park and decided to walk into town. It turns out that, because it was Sunday, just about every shop and pub were closed. The City, Bletchley, seems to be more of a "bedroom community" with a very limited city center. We did find an open "pub" and enjoyed a Guinness before leaving town. We met some local "folks" who were enjoying a social afternoon and had a chance to spend a few minutes talking about England and the U.S.

Our trip back into Central London took just as long as our trip out to Bletchley. We arrived back in town tired and hungry. A late "bite" and a chance to sit down and answer some emails was a welcome respite to a busy day.  As always we enjoyed ourselves immensely!
Posted by Dennis Steele at 3:32 PM No comments: