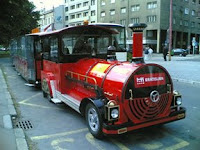 walking across the Charles Bridge into an older part of Prague. The bridge is beautifully constructed and was built in 1357 by Charles IV and was completed at the beginning of the 15th century. I continued into the city and wandered into Old Town, a part of the city that dates back to the 12th century! Now that's some history, I thought. I had an opportunity to board a small sightseeing "train" and thought I'd take in a bit of the city. As the train made it's way through the cit 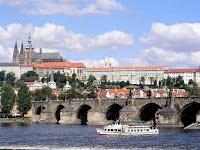 y, it touched on the Jewish Quarter, and I decided it'd look into that part of town tomorrow. Finally, half way through the sightseeing trip, we stopped at Prague Castle and is disembarked and stayed for awhile.

Prague Castle is 1000 years old on its own. This is an amazing complex of buildings, churches, basilicas, residences 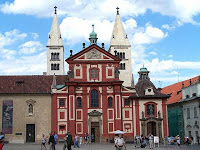 and royal residences dating back to 970 C.E. I found my way to the entry and was able to join a tour that had just started a few minutes before. Our guide was very knowledgeable and had good English skills. There were about 8 of us on the tour, so it was a small enough group to be able to ask questions. The tour took about an hour and was worth the time. Afterwards, I wandered the castle grounds a bit and decided to walk down the hill to the city. The castle overlooks the city from high atop a hill with the city of Prag 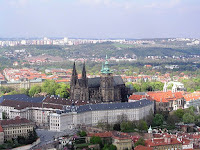 ue displayed beautifully below it.
As I walked down the hill, I noticed in some literature that the Prague Planetarium was on a tram stop I had used a couple of times. I decided to head there and see if I could make a contact with someone and see the planetarium. I found the planetarium easily and as I entered the front door, I asked if I could speak with the director or lecturer. A bit of a language problem ensued, but shortly a young man joined me who introduced himself as Jan Sifner. Jan is the Head of the Technical Department and was delighted to meet someone interested in his craft.
I enjoyed a delightful hour or two with Jan. He was good enough to show me through the entire planetarium. I was the only visitor there at the time even though it was open for bus

iness. In that respect I was lucky! We talked about the three planetarium projectors in the building, including a small Zeiss Projector from the 1950's, a variety I didn't know existed. After a bit, Jan asked if I'd be interested in seeing an English language planetarium show, and I said yes. I spent the next 50 minute in the plentarium theater, by myself, watching a fascinating show about alchemy and the early interpretations of astrology. It was a wonderful presentation and one I thoroughly enjoyed.
Jan and I had a chance to talk about telescopes, and I told him I was a telescope builder. We looked my w

ebsite and discussed a variety of different issues on the subject. He then told me of the Prague Observatory in the nearby hills and asked if I'd like him to fix up a private tour for me. Of course I said I would, and he made a call and gave me the name of an individual I'll be seeing tomorrow at 3 p.m. I'm looking forward to that outing very much.
As I was leaving the planetarium, I then saw a notice for a light show and concert in the adjoining fair grounds. Why not? I went over there, had a snack and enjoyed an hour of recorded music and "dancing lights" from 8 until 9 p.m. As it got a bit later, and darker, it started to cool down and I decided to call it a day. I've found an interesting "Chinese Restaurant" with an internet cafe in the rear. So for now, I'll catch up on my blog, check out an email or two, get a cuppa tea and look forward to tomorrow's adventures.
Bye..
Posted by Dennis Steele at 12:24 PM No comments: