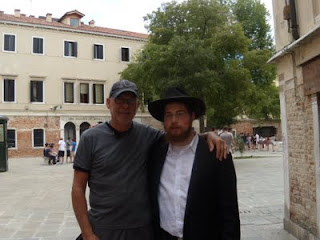 July 20, 2011. Venice Italy. We started out the day with a stop by the local internet point. There are variety of these kinds of stores throughout Italy. In this case, the internet point was in a small bookstore near a local university about 5 minutes from the Hostel. We then set off for a walk toward the "Stazzione" and found a laundrymat on the way. We'll do some laundry this evening.
Nearby, I re-located an artists' studio that I had visited during my trip to Venice in 2008. The artist, Massimo Busetto, occupies a small corner store/studio not far from the Grand Canal. His studio is full of his works, many of which I'd love to own. We talked about my previous visit and while he didn't remember me, he did enjoy the fact that I found him again and took the time to stop by. We invited him to Palm Desert and the very active "art scene" there. It was an enjoyable visit.
We took the "Ponte Degli Scalzi" (this is the main foot-bridge by the train station) to the other side of the Grand Canal and turned right, looking for the Jewish "Ghetto" (the term "ghetto" in Europe refers to the neighborhood, and doesn't carry the negative connotation we associate with 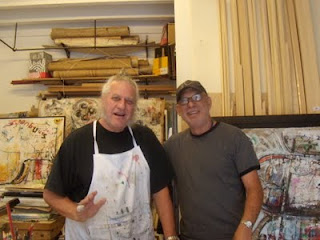 the word). It didn't take long before we found ourselves in the Campo Degli Ghetto. Besides the Chabad House, there are variety of art shops, artists, music and restaurants. It's a small area, but seems vibrant and with interesting points to see for the visitor. I had a rather long and interesting discussion with Elisha from the Chabad House about the meaning of donning of "tiffilin" -- and while he invited me to do so, I have so far declined. Maybe tomorrow!! We finished up the visit by stopping by the Restaurant Gam Gam for a wonderful meal. The restaurant supports the Chabad House so we felt we were supporting their effort in Venice.
We continued our walk around the neighborhoods and continued farther into the city -- or at least we thought. It's interesting, but the Grand Canal circles around the city, so as we walked farther and farther away from the train station, we finally realized were were walking closer and closer to our lodgings at the Camp Del Toma! We found and crossed the Ponte Realto. This bridge was built in 1181 C.E. It went through a couple of changes, and in 1255 C.E. it was changed from a pontoon to a wooden bridge. It was surrounded by a market and eventually became part of the market itself. Today, it is a modern steel/concrete structure covered with shops of all kinds (see the last photo of this entry). It was crowded and fun, with hundreds of people buying and selling items of all kinds. 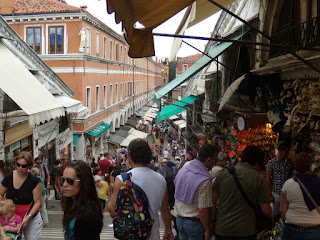 Later in the afternoon, we found the laundry and did a week's worth of laundry. Now, they tell you that Venice is an expensive city. I can now attest this is true, a "single load" of laundry cost us 24-Euros -- the equivalent of $36!! Wow, we coulda bought new clothes for that, right??!! Of course, any experience leads to another. We were having a bit of trouble understanding how the machines in the laundry worked, so a young man came to our rescue. His name is Sharif. Sharif is from Afghanistan and has been living in Venice for 2 years. While the rest of his family is still is his country, Sharif told us he was very glad to be in Italy and loved it here. He said he hoped to visit the United States some day, and we invited him to contact us. We'll exchange Facebook friendships.

Our final outing of the evening was for dinner. We walked toward the Ponte Rialto looking for a suitable restaurant and saw a Chinese Restaurant that looked interesting. We walked inside and looked around, not sure we wanted to stay. There were 2 couples sitting at a table who signaled us saying the food "was great". We had a enjoyable 10 talk to these folks from Manchester in the U.K. Lots of laughter and joking let to a delightful exchange between us. They said they were leaving for home in the morning -- my comment was "oh darn, we were going to buy you dinner tomorrow night"! With that, one of the guys said he'd "send me the bill". Great fun.

Oh yes, the food was great!!
So far, we've met interesting people from India, China, Afghanistan, Canada, Australia, the U.K. and of course, the U.S. So our trip has been more than just an Italian experience, but an international experience as well.
Tomorrow we plan to go to Murano, so stay tuned....


Posted by Dennis Steele at 6:20 AM No comments: