Yesterday, May 30 I took the train from Venice to Munich. It was a 6 hour trip and great fun. I was with 2 couples who all spoke English. One couple from Australia and the other fro 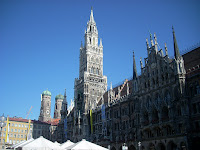 m New Zealand. We joked alot, took some pictures along the way and generally discussed our trip throughout Europe. I arrived in Munich around 8:30 p.m. and made my way to the Hostel. It was a 20 minute walk or so, but it was warm and pleasant and I enjoyed the stroll through the city.
Today May 31, I decided to go to the Dauchau Concentration Camp. At first, I thought an organized tour was the way to go. I inquired about one at the Tourist Information Bureau and showed up at the appropriate time. I was told it would be 21 Euros and take 4 to 5 hours. I asked if there was a bus, and the tour guide said "no, we'll take the subway!" Whoa, hold on, I thought. If he can take the subway, so can I. So it was back to the main train station. As it turns out, my Eu 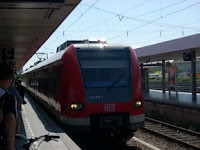 rail pass works on the buses and subways here in Munich, so I got directions and boarded the train for Dachau. It took around 20 minutes to get there.
Once in the town of Dachau, I used my Eurail pass again and took the bus to the memorial and museum. I then found that an English speaking tour was to leave in 20 minutes -- cost 3 Euros! Our guide had very good English skills and our tour took 2 1\2 hours. At the end of our tour, there was a 20 minute film about the evolution of the 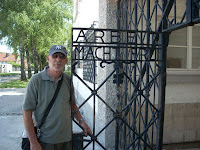 concentration system in general, and Dachau in particular. Later, I went back to a couple of the sights and exhibits and took some pictures on my own.
Essentially, some weeks after Hitler was appointed Chancellor of Germany, he ordered that a concentration camp be established for poltical prisoners. This was, at the time, as a result of the Rechstag fire. Dachau was used as a model for the other camps to follow and was used, mainly, for slave labor. In all, Dachau existed for 12 years, imprisoned more than 206,000 people and more than 43,000 of them died. An untold number of people, and not counted in the 43,000 dead, were sent to Auschwitz to be murdered by gas and other means.
A most interesting artifact is the existance of a crematoria. 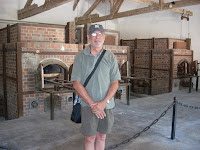 Originally, 2 crematoria were used to dispose of the dead and another 4 were added over the first few years. There was also a "prototype" gas chamber, where (it is thought) testing Zyklon B gas had taken place, but it is not sure whether any mass killings took place here.
The city of Dachau is quite beautiful. On the bus trip to the memorial, and nearby the camp, there were children playing, it appeared a grammar school was nearby and people lived and enjoyed their lives as we all do. It was dificult for me to separate myself from the lives people are living today and the realities of 63 years ago. The camp itself is a sobering place.

All of the major religions of the world have established memorials there (since every religion was represented in the killing), and I was told that more than 800,000 visitors attend the memorial every year. I spent about 5 hours there, wandering the compound and thinking of those poor souls who had passed there before me. An inscription nearby reminds those who attend about what had happened there and reiterates the motto NEVER AGAIN. Amen to that. 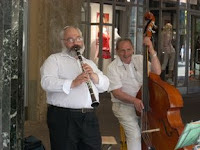 ich is a beautiful city as well. Today is Sunday, so many stores are closed, but there is activity throughout the city. So as not to end this entry to the blog on a "down note", upon returning to Munich I was delightfully entertained by Leonid Khenkin and his Klesmer-jazz music. He and his fellow musician, the bass player, gathered quite a crowd and entertained us all for as long we applauded. As I left, there crowd was still sitting -- loudly and happily applauding.

Both of these men are Jews. In a way, it is testament to the resilience of the human soul. Here, at this time and in this place, they live, work and -- presumably -- enjoy their lives.

Auf Weidersehen.....
Posted by Dennis Steele at 7:40 AM No comments: