August 16, 2014 -- Today we were up early and made our way to the Connolly Train Station. It's about a 10 minute walk from the Guesthouse. We bought our tickets for Belfast and boarded the train for a 9:30 departure. It's a 2 1/2 hour trip to Belfast Central Station -- but it's comfortable, smooth and warm. As mentioned, one can buy snacks, coffee or juices on the train.

We didn't know what to expect in Belfast. I recalled the years of the "troubles" between the Protestants and Catholics and the IRA/British Government unrest. But, of course, that's all in the past. The "Joint Declaration of Peace" was signed in 1993. Still, I'm old enough to remember the events clearly -- so it was something to consider. Or, at least I thought so!!  Of-course, it turned out to be "a non issue"!!

As we left the station and walked into the City Center, it became clear that Belfast is a modern, prosperous and vibrant city. The streets are wide and orderly, the buildings are modern and very beautiful. Certainly, there is the mix of the "old and new" that we found throughout Ireland. In just a few minute we happened upon "St. George's Market". This has been the site of a "market" since 1604 with the current building having been built in the 1890's. It was teaming with all manner of foods and crafts. 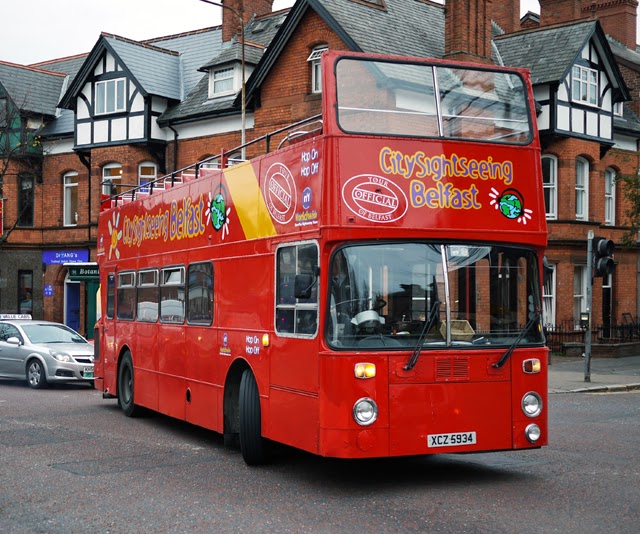 We continued exploring the city by walking a few more blocks into the center of downtown. Some of the stores were closed, but the streets were crowded with shoppers and tourists.  We happened onto a "sight-seeing kiosk" and had a nice chat with the proprietor. We found, also, there is a double-decker sight-seeing bus or a "black taxi" tour. We chose the longer time-frame of the two and bought our tickets for the 1 1/2 hour tour of Belfast. Our tour-guide was a young woman who was very well versed about her city. It was thoroughly enjoyable.

We had a chance to see many sights otherwise not available to us. The "Titanic" Museum, the Harland and Wolff Shipyard (which had built the Titanic) and the Northern Ireland Parliament -- a simply majestic building on magnificent grounds surrounded by lawns and trees.

Finally, a most interesting sight was the Peace Wall. The wall is a barrier that once separated the Irish Nationalists from the Unionists. Now, of course, the presence of the wall is no longer a barrier but a reminder of an earlier time of political and social unrest. It is covered with "graffiti" of a political and/or social content. We were told that there is an active movement, in Belfast, to take down the wall.

We left Belfast on the 4:00 train back to Dublin happy that we had taken the time to see this most interesting and beautiful city. Any of you who may come to Ireland are urged to give Belfast a try!!