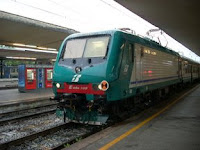 Tuesday, May 20, Rome. I was up at 7 a.m. to get to the train station by 8-ish. I had an 8:55 train to Rome, and my motto is "better early". So, early I was. Getting onto the train was a breeze and I noted that we'd arrive in Rome around 12:15 p.m. I use the arrival time as a way of knowing when we're getting close to the destination. I get my bag, stand by the door and ask the question to anyone who'll nod or speak my lan 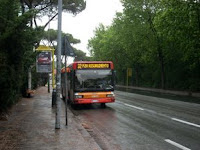 guage a bit -- "Roma Termini?" Two nods let me know I was in the right place at the right time.
Once at the station I found the information booth and asked directions to the hostel. "Take-a the Metro train A", I was told, then the 32 bus 7 stops. Off I went, found the "A" train and made it to the metro stop at Ottaviano just fine and figured I was in the clear. It wasn't to be, ac 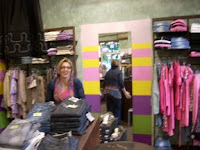 tually. First, it started raining pretty hard, and me with no umbrella. Second, where the heck would the 32 bus be found?? Only the bus gods and the rest of the Roman population knows. I did not, and I was having more than enough trouble asking the question while getting wet.
"Oh taxi!!" ---- Ten Euros later, I was at the hostel, checking in, getting the lay of the land and finding out a number of oddities about the place. For example, until now, I've been able to rent towels wherever I've gone. Here the towels are paper, so I decided I'd take the bus back to Ottaviano and buy a towel. After a quick tutorial by the desk clerk -- who spoke some English, but not quite enough for the both of us -- I was off to the bus stop, just around the corner.
So, here's a bit of advice. First when taking a bus in a strange town, decide on the direction you need to take, and second; remember the name of the stop so you can find your way back! I did neither, and wound up at a place called Lepanto instead of Ottaviano. I wanted the latter because I had seen a large number of shops and a market selling all kinds of interesting stuff. Who knows, maybe towels! Right?

So, I wanted to make m 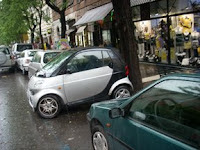 y way back to the hostel and start again. I figured I'd need the practice, since I'll be here for 5 days and want to get myself around. Oh yes, another lesson to learn -- TAKE the name and address of the hotel in case you didn't remember the bus stop name. In my case, I didn't take the name either. Fortunately I had the receipt for the room charge with the name at the top of the receipt. A bus driver took pity on me, told me to "sit sit", and got me back to the hostel in around 15 minutes.

This time I was determined to do it right. I got a map, got the address, wrote down the name of the bus stop, got on the right bus for Ottaniano and tried again. With good results, I might add, I was on my way and it was still raining. I wandered into the first shop I saw and said "Inglesas??". No such luck, but I said "buy an umbrella" and the lady in the shop told me to wait and disappeared behind a door. A minute later, she gave 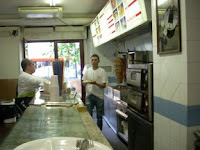 me an umbrella and when I asked how much, she said "go go, free, free"! I hugged, took her picture and went on my way (her picture is at the top of this page).
I found the towel, had a great falahfal, got a free umbrella, found my way back to the hostel and noticed how Romans park their cars. So, here' some pictures for you to figure out.

Tomorrow I'll take a 1/2-day bus tour, start taking in the sights -- possibly the Colosseo, find the statue of David, plan some day trips and continue getting familiar with the metro, busses and people. So far Roma has been quite an adventure.

Ciao for now.
Posted by Dennis Steele at 9:30 AM No comments: