Wednesday, June 25, 2008, Amsterdam, Holland. Jennifer and I were up at around 9:30 this morning and enjoyed breakfast at th

e hotel before venturing out. We had decided yesterday to visit the Rijksmuseum (this is the National Museum of Holland). The museum houses the "Dutch Masters", including Rembrandt and Vermeer. It is located in the same "Museum Plein", or square, as the Van Gogh Museum and was an easy walk from the hotel. We purchased the "audio tour" and spent around 2 hours walking through the collection. Obviously, the artwork, silver work and other parts of the collection were very beautiful. The museum was built in 1885. 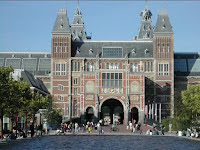 ed into the city center, exploring the streets as they wound through delightful shops, across the canals and finally had a delightful Thai dinner in a small family-owned restaurant. At one point during the day we found ourselves outside the Heineken Brewery and expected to enjoy a tour. We were told that the tour included a beer-sampling session at the bar. Our luck ran out when we found that the brewery was closed for renovation and is expected to open later this sumer. Another good reason to return to Amsterdam.

We walked back to the hotel at around 9:30 p.m. It was still daylight, of course, and we stopped at another small coffee shop to enjoy a last cup of coffee before calling it a day.

Tomorrow we are on a day trip to Brugge in Belgium. It is around 3 hours by train, and from what we've heard Brugge is a most beautiful city. So, stayed tuned, and I'll report on that outing tomorrow evening.

Posted by Dennis Steele at 3:11 PM No comments:

June 23/24, Monday/Tuesday, Amsterdam, Holland. It's been a quick couple of days! Jennifer arrived on 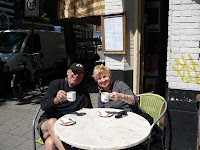 Monday and after a bit of jet-lag napping, we were out and about for an exploratory walk around the city. Yesterday, though, we had a plan. After looking at the map, we decided we'd go to the Van Gogh Museum and then see what happened next. As it turns out, the museum isn't too far from the hotel, so we decided upon walking there.

We left the hotel, took a right t 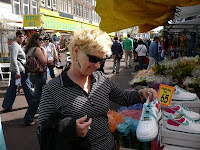 urn and discovered a charming neighborhood of shops and activity. There was a large open market we found, as well, as walked through there slowly. Jennifer bought a pair of sun-glasses which promptly broke. We thought 'we'd go back today and change them for another pair. 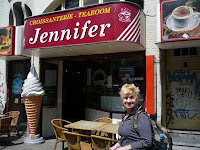 our 10 Euros to get inside. It's a new and brightly lit building, and we took our time going through all 5 floors of artwork. There is art from a variety of artists, as well as Van Gogh. By the time we finished the Museum, we were determined to find a cup of coffee and headed toward a street across the "plein" from the museum. We enjoyed a tasty cup of coffee an Jennifer enjoyed a 30 minute shopping excursion to a couple of nearby stores.

We decided to find our way to the Anne Frank House, so we boarded a tram and headed toward the center of town. As we walked along one of the many canals in the city, we decided we needed to take a canal boat before we left Amsterdam. We plan to do that on Friday if not today. When we reached the Anne Frank House, we found there would be a 45 minute wait to gain entrance. We stood in line and was able to tour the house at around 4 p.m. The Anne Frank House is, of course, that which has been made famous by the book Diary of Anne Frank, the story of the Frank family's attempt to hide from the Nazi's in 1942. The family was later betrayed and was deported to various death camps in 1944. Otto Frank, the father, was the only survivor.

Later in the evening, we ventured back to the neighborhood by the hotel and found a great "tapas" restaurant for dinner. We liked it so well that we both thought having dinner there again was a good idea. We got back to the hotel round 10 p.m., after a completely delightful day in Amsterdam.