May 27, 08. Firenze (Florence). The first thing I did this morning was make a reserveration for an overnight in Venice. I expect to get up tomorrow "whenever" and make my way to t

he train station. High-speed trains leave for Venice every hour, so it should be easy to get onto one.
I walked down the long driveway to the bus and was able to recognize the Piazza where the building housing the statue of David was located.. I went to the main entrance and asked if there was a fee. I was told "no, no fee, this is a university". So far so good, I found the appropriate line, waited my turn to get into the Galleria dell'Academia and was stopped by a lady in a glass box. Regardless of what I had been told, I was charged 6 1/2 Euros to get inside. Before long, I was standing face to face with Michelangelo's David. We've all seen pictures and documentaries, I'm sure, but standing there and looking at this massive sculpture is overwhelming. David is atop a pedestal that stands 5 or 6 feet tall. Then, David sta 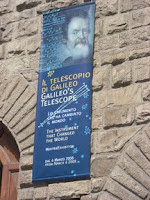 nds another 8 or 10 feet on his own. He is a massive and beautiful work of art. There is no doubt that Michelangelo was a genius and a good reason why his talents were in demand by the Church. Unfortunately, pictures were not allowed, so what you see is not my own photo.
It's difficult to decide to leave a venue like this. But leave I did, and I made my way back toward the Fiume Arno and the science museum. Today is another very warm day, along the way I found a neat little market where I was able to buy some water and drinks. It was a bit "upscale", and I thought it might be the Florentian Trader Joe's
As I left the museum, I started walking away from the river and back into the center of the town. I saw on my guide map there is a large "Piazza Mercato Centrale" and decided to take a look. This is a 4 or 5 square black area in and around the Basilica di Santa Maria Novella, and seems to specialize in "stuff" -- better known to those of you in t 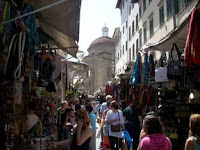 he know as Chochka! There were hundreds of vendors and thousands of prospective buyers!

I spent the rest of the day wandering up and down the twisty and narrow streets of Florence. It is a delightful town with lots of friendly people and wonderful sights to see.

More tomorrow -- from Venezia!!
Posted by Dennis Steele at 3:46 AM 1 comment: